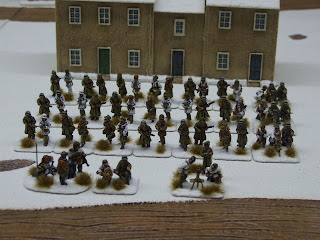 The Fuhrer Begleit (escort) Brigade (FBB) was, in an earlier and smaller incarnation, charged with guarding Hitler's headquarters. By the winter of 1944, it had been expanded into a powerful  brigade sized formation, containing  armour, infantry, artillery and other supporting services. Part of 5th Panzer army's armoured reserve, it was committed to the fighting around St Vith in an attempt to capture this vital town.

Elements of the brigade are represented in the game, including the armoured panzer grenadier battalion pictured here. Each of the three companies (15 figures) are carried in two hanomags and are supported by a mortar platoon and HQ group with a "Drilling" AAA hanomag providing air cover - quite a powerful force. The battalion will be supported in its attack down the northern road by 2 companies of assault guns. The figures are mainly Chiltern with a few Raventhorpe infantry in winter camo thrown in.

The vehicles and figures for the game are now all finished, save for a group of civilian "refugees". I am currently working on the remaining wood bases and buildings that are needed to complete the terrain. A tight schedule, but I should get there!!
Posted by steve at 06:40 No comments: 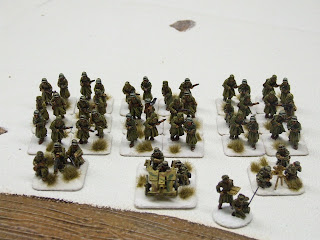 Just over two weeks to go to the show and most of the figures are now done. Here is the completed Volksgrenadier battalion, with its three, 12 man rifle companies and supporting MMG, mortar and infantry gun platoons and HQ group. Most of the figures are Chiltern Miniatures, although this particular range is now owned by SHQ I believe. The infantry gun and mortar crew are Britannia, whilst the mortar itself and the HQ group are Raventhorpe.

Volksgrenadier divisions were an attempt to replace many of the formations lost during the summer of 1944. These hastily created divisions were generally understrength and lacking in equipment. Many of the men were drawn from redundant air and naval units and were largely untrained in infantry skills. Nonetheless, some of these divisions, which made up the majority  of the German infantry in the Ardennes, fought surprisingly well. One such was the 18th, which operated with great skill in the fighting around St Vith. This battalion would be classed as "regular", rather than "militia" using Rapid Fire! rules.

Next to be completed are the FBB panzer grenadiers. The figures are done, but the various vehicles still need a little work. Hopefully I will be able to post the results soon.
Posted by steve at 02:46 No comments: 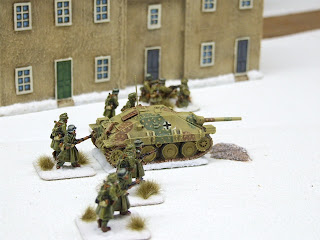 The Germans are divided into 2 Kampfgruppen; the first, moving down the left hand road (see the 9 August posting), consists of elements of the FBB: an armoured panzer grenadier battalion, with an HQ, 3 infantry companies (each of 12 figures and an MMG platoon), a FLAK platoon (Drilling AA) and a medium mortar platoon. This is supported by 2 companies, each of 2 JgpzIV/70(a). The second, moving down the right hand road comprises elements of the 18th Volksgrenadier Division, supported by further units from the FBB. The VG have a single battalion comprising an HQ element, 3 infantry companies (12 figures each) with MMG, mortar and infantry gun platoons, supported by a Hetzer SPG. This force is bolstered by a FBB panzer company (2 x PZIVs), plus a dismounted panzer grenadier company and a Mobelwagen SPAA vehicle. The whole force is supported by a battalion of 2 x 105mm howitzers - in the early stages of the attack, the Germans experienced great difficulty in bringing forward enough artillery.

Both sides will find it difficult in this game I think. The Americans are rather thin on the ground to begin with and have little in the way of armoured support. The task force from 7th Armoured will have to negotiate the refugee choked town of Rodt before they can offer any assistance. The Germans, whilst having better armour, will find their infantry very exposed as they attempt to cross the open ground. Hopefully it will offer a close game.

As things stand the majority of the American force is ready. I still have most of the German vehicles and maybe 25% of the figures still to do. I also need to make a few more wood modules and the whole of Rodt still needs building. A busy 3 weeks ahead I think!
Posted by steve at 12:24 No comments: 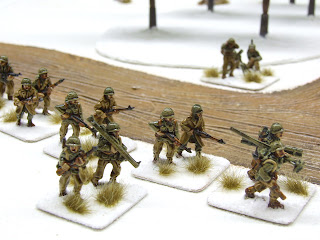 I thought that a little information on the forces involved might be of interest at this stage. It is a fairly small game, involving the equivalent of a couple of battalions a side. The American defenders at the start represent the kind of scratch force hastily put together all along the Ardennes front. The advance force around Ober Emmels consists of a company of engineers with a Sherman dozer in support and a second engineer company dug in on the high ground overlooking the village. Also on the hill is an OP for an armoured artillery battalion of 3 x SP 105mm howitzers which is deployed close by. Another, slightly larger force, is deployed in and around the town of Rodt and consists of a 3rd engineer company, supported by an armoured infantry company, with MMG and mortar platoons attached; a recce group of a Stuart light tank, an M8 Greyhound armoured car and a couple of jeeps loaded with infantry. There is also a 3" anti-tank gun. The company sizes are a bit larger than normal for Rapid Fire! as we find that infantry tend to wither away fairly quickly. The engineer companies are all 12 figures each, whilst the armoured infantry are in 16s.
As the German attack opens, a task force from 7th Armoured Division arrives on the outskirts of Rodt to bolster the defence. This comprises two more armoured infantry companies in M3 half-tracks, supported by a couple of tank companies. Before they can intervene however, they will have to make their way through the town, which is choked with refugees fleeing the fighting.
The next post will detail the German attackers.
Posted by steve at 16:03 No comments: 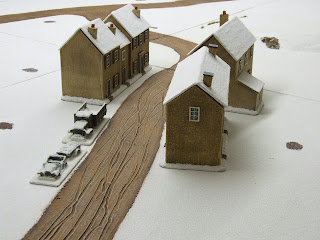 This picture shows the completed village of Ober Emmels which is held by American  engineers. This is the view of the village that the Germans will have as they arrive on table and begin their advance. To the left of the road are destroyed American vehicles, already largely covered in snow.

The Game is based on German attempts to envelop and capture the important town of St Vith, early in the Ardennes operation. In reality there had been little in the way of snowfall at this time, but I really did want to make this a "snow terrain" game. I also wanted to represent the Fuhrer Begleit Brigade (FBB); a curious formation, based on one of the units responsible for guarding Hitler and repeatedly expanded to a powerful brigade sized armoured formation. One of its main weapons was the Jagdpanzer IV L70(a), a high-sided and relatively rare variant (only 278 were produced) of the Jagdpanzer IV L70 tank destroyer. This "Alkett" version mainly saw service on the Eastern front, but a battalion of them formed part of the FBB's panzer regiment in the Ardennes campaign. Raventhorpe's Ready to Roll range had recently released a lovely model and I fancied painting up a few!

The buildings are made from 2mm plasticard with internal floors and removable roofs. The construction style owes almost everything to that doyen of scratch building, Mick Sewell. The terrain boards are constructed from some old TSS modules that I had from years back (I normally use the much denser blueboard, but it seemed a shame to waste them). These are based on 3mm mdf, with card strips to protect the vulnerable edges, before covering with several coats of textured paint and a layer of artificial snow, which gives a nice "glistening" effect. The roads are powdered Tetrion, suitably weathered and painted.

The next few posts will show some of the figures and vehicles, with more shots of the battlefield as it develops.
Posted by steve at 07:02 1 comment: 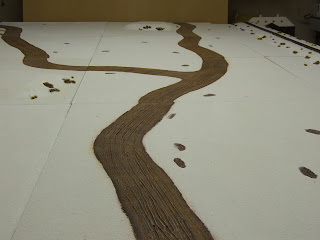 At last, I finally have something to post concerning the Ardennes demo game I am putting together for PARTIZAN on September 4. Although things have been very quiet so far as posts are concerned, I haven't been idle﻿. The terrain boards are finally complete and the photo above gives a general idea of the terrain layout. The table is 8' x 5' with a railway embankment running down the right hand side. The German attackers, comprising elements of the Fuhrer Begleit Brigade and 18th Volksgrenadier Division are approaching down the two roads at the top of the picture against a scratch force of American recce and engineer detachments. As the game opens, a hastily assembled Task Force from the 7th Armoured Division is arriving along the road at the bottom of the picture to stem the German advance.
As well as completing the terrain boards, many of the figures and vehicles are also finished, as are some of the drop on terrain pieces, such as buildings and areas of woodland. With only three and a half weeks to go however, there is still a long way to go before the game is ready for its first public outing.
To the left of the road junction, lies the small village of  Ober Emmels; the foremost outpost of the American defences. South of the junction is the more substantial town of Rodt. The area is further broken up by expanses of dense fir woods. Over the next 3 weeks I will hopefully make regular postings which will show the additional features of the game as they are completed. If you are planning to be at the show, by all means drop by and say hello. To be continued....
Posted by steve at 15:34 No comments: