A couple of old wargaming friends came over to give the new rules a try. Neither had played before but soon got the hang of it and seemed to enjoy themselves. Here is a pic of the starting line up. 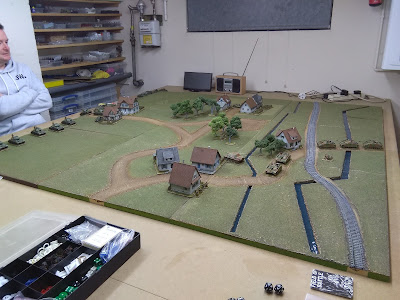 If you would like to read the full report, please take a look at my mate Roj's excellent blog. Hope you enjoy it. This is the third game so far and every one has gone really well. Hopefully they are all up for a lot more play testing over the coming months.


As I mentioned a while back, I have been working on a set of WWII rules that I can use as an alternative to Rapid Fire. As an avid RF user ever since they first appeared, I have , for a while, been looking for something that would allow me to incorporate a card-driven system with a greater emphasis on command and control and troop quality, whilst keeping the simplicity and playability of RF.

Over the last few years, I have become a real fan of the Piquet rules system, both in its original incarnation and the modified Field of Battle (FOB) version. I particularly like the fact that there is no formal move sequence, rather the actions that you can carry out at any particular time are governed, to a large extent, by the card deck that you are using. These decks can be tailored to suit the force that you have.

It really does work. A 1941 Soviet force, is likely to perform very differently (and usually no-where near as well) as a 1944/5 force by virtue of the "action cards" that are included in its army deck. Whilst most armies have the same, or similar opportunities to do the basics - move and fire, although even this can be modified - other actions, usually relating to the command and control side of things can vary widely. Basically at the start of each phase, both players roll their command dice (d4, d6 or d8, depending on overall command and control ability) to decide who has the initiative and by how much. For example rolls of 5 and 2 would mean that the active player may turn and act on 3 cards (the difference between the rolls), before his opponent gets his chance to do the same. The winner of the command roll may surrender the initiative to his opponent if he feels it is tactically advantageous.

One of my favourite cards is called the "Lull" card. Its initial effect is that of being a wasted card, in other words you cannot act on it. This represents the "friction of war" we all read so much about. The less able your command and control functions are, the more of these cards you have in your deck. A well led and well trained army may only have one of these cards in its deck (out of 24-30 cards in total); a really poorly led army by contrast might have as many as six of them!! You thus find that you are unable to do as much as  a better led opponent. Not only that, but each time a Lull card is drawn, both players roll their command dice (a d4, d6, d8). If the non active player manages to beat his opponent's die roll, he steals the initiative by turning and acting on one of his own cards, thereby interrupting his opponent's actions. This can have serious repercussions for the other player, who can find it difficult to "build up a head of tactical steam" as he is being constantly interrupted.

It is a very elegant and essentially simple system, but one that offers a huge variety of results, as you can never know in advance in what order the cards will be drawn (some are definitely more useful than others), or who will win the initiative. There is also great scope for adding "special" cards to spice things up, or to reflect historical factors.

Anyway, a while back, an old wargaming friend, Andy Lawson, agreed to come over and give them a go. I wasn't really sure how things would pan out, as the system was completely untried. Andy was quite happy to risk it and is also one of those people that can spot a flaw in a set of rules a mile away, so he was the obvious choice as guinea pig!

The game was set in Germany, late April 1945 and featured a very mixed German Kampfgruppe against a reinforced Soviet tank brigade. The Soviet objective was to break through the German defences and secure a crossing over the canal, before pressing on to Berlin.

The German defenders were composed of a small "home defence" battalion with a company of Volksturm and another of civilian police. These were rated as pretty abysmal. There was also an understrength German infantry battalion, which was rated as average and a mixed armoured group of company size with Panzer IVs, STUGs and a Jagdpanther. There was also a Luftwaffe "88" battery dug in to protect the bridges.

The Soviets had three understrength tank battalions (3 x T34/85s each) all of which carried a company of infantry as tank riders, with the battalion heavy weapons arriving in their own soft transport. There were also a couple of ISU122s as heavy support. Andy also fielded a strong recce battalion with two T34/76s, a couple of companies of infantry and some support weapons. All the Soviet stuff was rated as above average, being from a Guards Tank Corps. 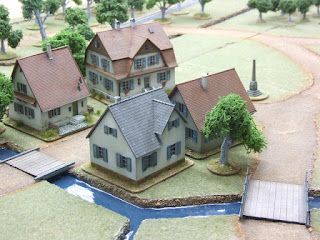 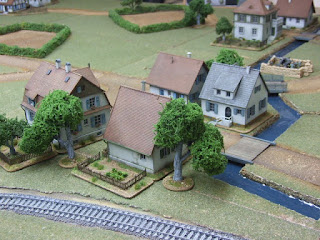 These two images show the twin villages and the three bridges that the Soviets were aiming for.

After a quick briefing on the salient elements of the rules, Andy started to move on table. The left hand column of his attack unfortunately threw low and advanced very slowly, whereas the other elements seemed keener to come to grips. 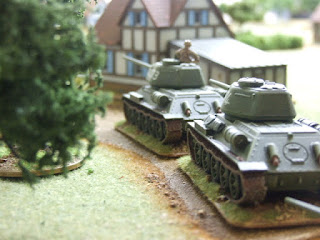 An early success for the Soviet tankers. 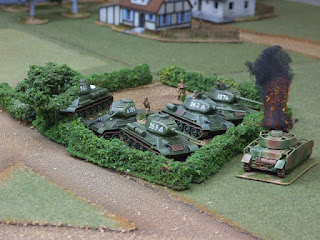 They didn't have it all their own way, as the Raupenschlepper and its Pak 40 covered itself in glory, knocking out first a T34/85 before despatching a T34/76 from the recce battalion. 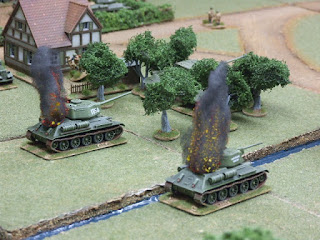 In the centre, the Soviets pushed on, not without loss and brought forward their big guns to cover the final charge to the bridges. 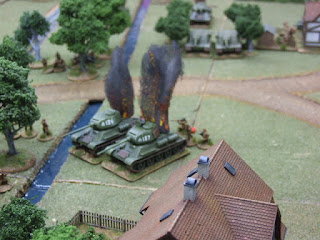 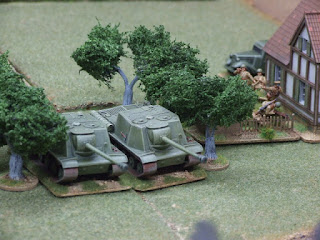 The recce battalion meanwhile was forcing its way, against stiff opposition from the German infantry, down the left flank of the German defenders. 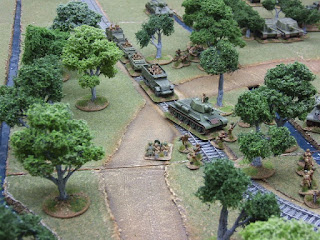 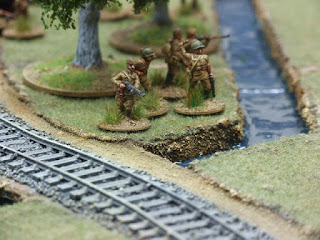 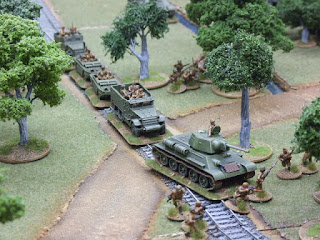 In the end, we were both defeated by the clock, as we ran out of time. We left the game nicely poised, with Andy getting ready to launch a major attack on the left of the German line. It could have gone either way, especially as I had a nice surprise, in the form of a Jagdpanther skulking inside the threatened village. 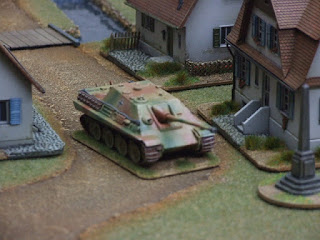 Even so, Andy had plenty of armour left, including the heavy ISUs and his infantry was starting to close on the village (occupied only by the Volksturm), from two sides.

To my delight, the rules seemed to work pretty well and Andy really enjoyed the game. He seemed very keen to give it another go and liked the "feel" of the game and its mechanisms. There is undoubtedly a great deal of play testing and revision to do and now that I know that the game at least works, we can roll it out to the other members of our merry band, who all seem quite happy to try it out. Hopefully there will be more to report over the coming months.