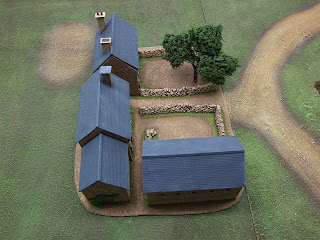 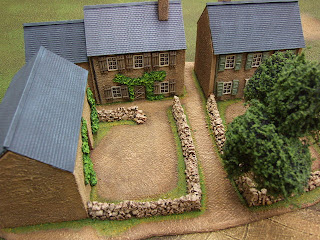 This module represents a small village in 20mm scale. I find that laying out the buildings with walls and the odd tree breaks up the line of sight and looks more interesting than several buildings on separate bases - more integrated if you like. As usual, the buildings are made from 3mm MDF, with internal floors and removable roofs. The roofs are Wills plastic tiling, which is fine for this scale, although hand tiling is better for 28mm buildings. 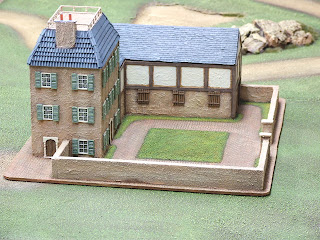 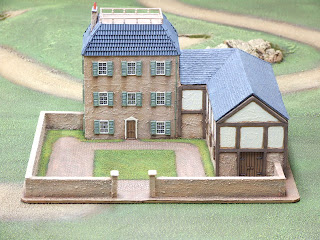 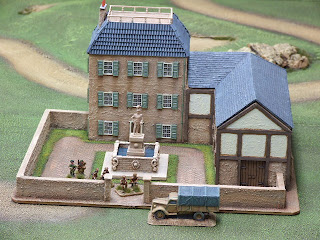 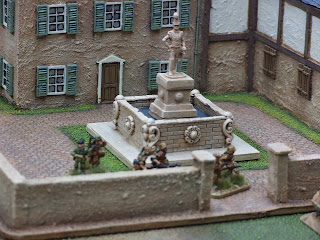 The second module represents a fortified farm/small chateau, typical of France and the Low Countries. This is a more substantial structure, comprising a solid 3 storey house and large barn. The statue pictured in the final 2 photos is an optional extra!! The 20mm Britannia panzer grenadiers give an idea of scale. The 3 storey house has a removable 2nd floor, to allow access to the first floor and, of course removable roofs. The roofs in this module are done by hand.

There are other projects well on the way to completion and I will post details as soon as I have them.
Posted by steve at 13:31 5 comments: 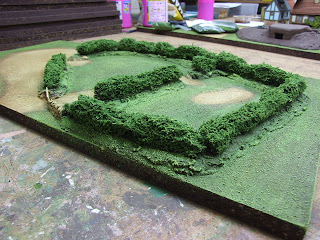 This is a bit of an interim post to prove that I have had my nose to the grindstone!!

The picture above is of a 30" x 15" "half board" that I completed today. The bocage is made from a base of 10mm Styrofoam, textured with tile grout. The hedging is made from that old favourite, rubberised horsehair, sprayed black and liberally coated in PVA before being finished with a blended flock and finally sealed with matt varnish. I must admit I was quite pleased with it, although the picture isn't brilliant. 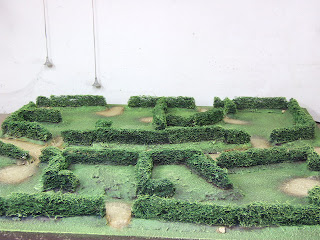 The 2nd shot is of a full size 30" x 30" board. This is a more detailed piece with a partly sunken road running down the centre and with a more intricate bocage network. It still needs flocking and varnishing. This will hopefully get done over the next week.

So far I have also complete a full hill board and a full plain board with a half board with road to go with the half board of bocage at the top. I am currently working on a "T" junction with small hill and two "detailed" half boards. Although my terrain will have to do duty for all my wargaming needs, I do want to make a few specials for my 20mm WWII collection. These boards will be more detailed with built in features such as walls, hedges etc.

Over the next couple of weeks I hope to complete enough boards to lay out a full size battlefield. When I do, I will post some pics and more details. Hopefully this brief post will whet your appetite for what is to come.

I have also been pretty busy on the buildings front and should have a few things to show before long.

Right, back to work!! 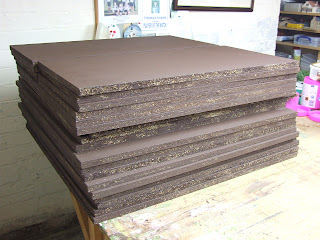 All I can say is that I have been busy. A feeble excuse for such a long break in posting, but I have not, I promise, been idle. Apart from the day to day work of fulfilling painting commissions for customers, I have been working on the terrain side of things as well.

The picture above shows the undercoated terrain boards that I will be working on over the next couple of weeks as I look to replace the old TM Terrain boards I had previously. I have thought long and hard about the format that I wanted for my terrain. It had to be multi functional - suitable for all the periods that I game from the Italian Wars to WWII, but with enough "period detail" to make it different. In the end I decided to go with the old but tried and tested 18mm chipboard, cut at a nearby B&Q into 30 inch squares for the main boards and 30 x 15 inch "half boards", which I will use mainly for terrain specials that will make the overall layout more visually interesting. I have a dozen of each size - enough to make a couple of good size tables, with a few boards left over - certainly enough to be going on with. Each board has been given a couple of generous coats of paint (chocolate brown) on each side to combat warping; that done, they are ready for the real work to begin. Why 30 inches, rather than 2 feet square? Mainly becasue a modest increase in the length gives a more than 50% increase in surface area over a 2 foot square board (900 square inches, rather that 576). This is particularly useful when making hills and ridges as the slopes can be extended further and made more gentle. It also allows for a more natural look for linear features such as roads and rivers.

One of my main periods is WWII and I want some of the terrain pieces to be more detailed than the more "general" boards that will be in use for all my gaming. So I am going to start with a half board containing some integral walling that will, combined with additional drop on pieces such as buildings and trees, make an attractive farm. I will also work on 2 or 3 large boards with the beginnings of a road network and that all important high ground. As I progress, I will keep you posted on how things are going and a few of the techniques I will be using - nothing particularly new, but hopefully of some interest. When some of the terrain boards are done, I will add some of the buildings that I have been working on. I am also hoping to make a full layout for a demo game, which will hopefully get a run out at PARTIZAN II in September. This is still in the planning stage at the moment but will probably be an Eastern Front theme - either set around the Seelowe Heights near Berlin or a game based on  the naval evacuation of one of the Baltic ports, with a harbour and defended town.

I also have a lot of recently painted figures to post, including Italian Wars Swiss and Spanish and some of the lovely Warfare Miniatures Grand Alliance cavalry.

I will make a real effort to keep the posts coming a little more regularly and hopefully you will find something to interest you.