You Can't beat the Dice!!

It's something all wargamers have said at one time or another - "it was all going so well but the dice deserted me". A chap who bought the Seelow Heights book when it first came out, got together with an old friend to try a couple of the games - it did not go well for him! Check out his report - you have to feel for the guy - unbelievable luck! 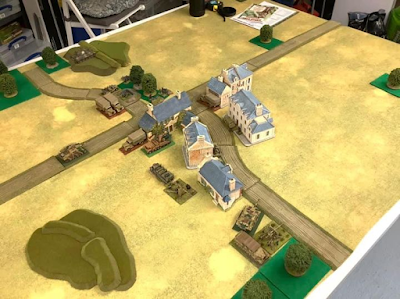 He was playing German and here is his initial set up - good dispositions, the Soviets will have their hands full was my first thought - how wrong can you be! 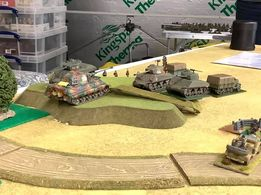 The spectacularly ineffective King Tiger is about to be over-run. A lesson for us all!!
Posted by steve at 09:34 5 comments:

The Seelow Heights A Wargamer's Guide: A Few Thoughts 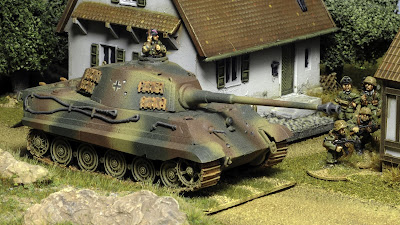 The genesis of this book goes back to 2013, when I put on a multi-player demo game covering a section of the Seelow Heights at the Partizan II wargames show in Newark. The game itself was a great success, with the Soviets finally overpowering the German defenders late in the day. For some reason, interest in this operation stayed with me and finally resulted in the writing of this wargamer's guide. Now it is out there, I thought that a few notes on its design and the scenarios might be of interest to those of you that have been kind enough to purchase it and to those who may in the future.

Although Rapid Fire has been used by our group ever since they first came out, followers of this blog will know that I am developing a set of rules of my own: "Road to Berlin". These are card driven and very different to RF, but have played well in testing so far and everyone seems to enjoy them. However I decided to express the Orders of Battle in RF terms as these are our "go to" set and I couldn't see any reason not to. That said, the scenarios lend themselves very well to many other regimental level (and above) sets such as Blitzkrieg Commander, Korps Commander and Command Decision to name but three; all that is needed are a few tweaks to fit in with the specifics of your chosen rule set.

First of all, the Special Rules. To give any operation an appropriate "feel", you need special rules to reflect those little details that make an operation unique. I also wanted to amend/expand some of the existing rules to (in my view) better reflect the troops and weapons concerned. So I thought I would take each one in turn and briefly explain the thinking behind it.

German 88mm/L56. Upgraded to a Class 1 gun. The Tiger in RF seems little more than an up-armoured Panzer IV - same gun class and slower. Better armour true, but not the terror weapon many allied soldiers saw it as. For the flak gun it can be left as a Class 2 weapon in the hands of  Luftwaffe crews inexperienced in engaging ground targets, but Class 1 otherwise.

T34/85. Armour downgraded to C (I believe this has now been done by Colin and Richard in RFR) and enhanced range removed. Soviet optics were notably inferior to those used by the Germans and it seems unreasonable to allow it to outrange the Panzer IV and enjoy range parity with Tigers I and II or Panthers.

Soviet Heavies. These are powerful bits of kit but suffered from low ammo storage and slow rates of fire. Seemed reasonable to limit their ammo to 4 or 5 shots per game.

Panzerfausts. Of all the additional/special rules, this is the one that seems to have resonated with readers the most. By only allowing one Panzerfaust per company, even late war Germans get one shot and are then essentially defenceless against armour. My amendment is easy to use, requires no record keeping and makes German infantry a much more serious proposition where enemy armour is concerned.

Troop Quality. In Rapid Fire, this tends to be reflected simply in a modest uplift or downshift in firing and morale. Making militia units more vulnerable to fire by adding to the firer's effects dice seemed an appropriately simple way of addressing the issue. The main element however was how to represent the greater tactical finesse of German panzer units without affecting playability. The way I chose to do it is above all simple; every time a German vehicle is hit, roll a d6: on a 1-3, you apply the effects as normal, on a 4-5, reduce them by 1 level (eg: knocked out becomes heavy damage) and on a 6, ignore the effects altogether. Because RFR reloaded has changed  the way attacks on armoured vehicles are conducted, this is modified to a -1 on the effects dice at short and medium ranges only.

So what is the thinking behind this? Well throughout my reading on this operation, one thing came up again and again: the ability of quite small numbers of German tanks and assault guns to inflict serious damage on much larger formations of Soviet armour. What I wanted to do was to give the Germans a built in "tactical advantage" that would allow them a kind of "get out of jail free" card in the form of reducing the effect of Soviet fire on them. It doesn't confer invulnerablity, just a kind of saving throw to reflect their greater tactical agility and awareness.

Combined with the "hit and run" rule, which allows some German vehicles in certain circumstances to move and/or fire during the Soviet move in addition to their own, German panzer and panzerjager units have more hitting power and survivabilty.

German Kampfgruppen. This rule simply allows the German player to organise his infantry units in a more mission based way, rather than me laying down the internal organisation of each battalion. So, for example a battalion with 30 figures in it can be organised into company groups of varying sizes and composition according to what the player hopes to achieve, with support weapons attached (or not) as he sees fit. Again a simple enough idea that reflects German tactical flexibility without additional complexity.

Field Defences. Being in hard cover, whilst helpful, doesn't offer that much protection in Rapid Fire (although RFR does attempt to address the horrible vulnerability of infantry). This rule makes it harder to kill German infantry in prepared defensive positions (rather that just hard cover) and obliges attacking Soviets to get stuck in, rather than stand off and simply shoot them out.

Panzerjager Platoons. Although this variant only appears in the final scenario, it has wider applications in late war games. Essentially special platoons, heavily armed with A/T weapons are more willing to and effective at tackling enemy armour. It could be used for example with the A/T companies in many Volksgrenadier regiments, which are armed with Panzerschrecks or the Fallschirmjager platoons that shot up the leading elements of the Irish Guards during the breakout from Joe's Bridge at the start of Market Garden.

Forwards. This is probably the rule that would and should be used most in the Seelow Heights scenarios. Simply put, the attacking Soviet infantry can exchange speed for vulnerability by adding the score of 1 average die to their normal 6" movement but at the cost of  surrendering the ability to fire and the Germans getting firing bonuses against them. In the scenarios I have tried to apply time pressure to the Soviets in achieving their victory conditions. This reflects Zhukov's obsession with breaking through quickly and getting to Berlin first, regardless of casualties. This rule can increase the rate of advance of the Soviet infantry by some 50-60%, but if caught in heavy fire, it can prove expensive. It is a useful tactical option, but one to be used carefully.

Soviet Artillery. This was an attempt to reflect the advantages and shortcomings of the inflexible but massive bombardments that were a feature of the Eastern Front. In many of the scenarios, the Soviets cannot control their artillery through observers, rather they must pre-plan their fire before the game starts, sometimes with a secondary bombardment well into the game. This is obviously inflexible. To reflect the power of these bombardments, the Soviets can "double up" their firepower, whereby if 2 artillery units (typically battalions) target the same area, German units under the template can be suppressed, removing their ability to move and, more importantly, to fire. Properly planned this can suppress the German defenders at the critical point, but timing is everything.

The principle behind all of these amendments was first and foremost simplicity; it was also an attempt to reflect in a generalised and wargame-able way, some of the features of the Seelow Heights operation on the table.

One gentleman that bought the book (Hi Darren) played out one of the scenarios and it looked like a great game. One of his local rules seems to be to use bases representing entire companies with around 3 figures on them and tracking casualties using small dice in a hole on the base itself. This is an excellent idea. At a stroke you can double or treble the playing resources you have in terms of infantry figures. One of the main problems I wrestled with during the writing of the book was the sheer scale of the operation. Many of the games do feature a couple of Soviet infantry regiments (admittedly pared down), this would make it much easier to manage with a smaller collection, although I do offer some suggestions on "bathtubbing" or scaling down the games if you need to. Check out the game, it is an interesting read:

Warfare in the Age of Cynics and Amateurs: The Seelow Heights - More Rapid Fire Reloaded

Hopefully this brief overview has given an insight into some of the special rules and the thinking behind them. If you have any comments or questions, I would be delighted to hear from you.