One of my main sources of enjoyment from this hobby is the aesthetic. The way a game looks really matters to me. I have lost count of the number of games I have seen, particularly at shows, where well painted figures are let down by poor terrain. Conversely figures painted to a fair standard can be elevated to the excellent by nicely done terrain boards, buildings, trees and so on. This is why I am trying at the moment to upgrade my own terrain. Over the coming months, I will hopefully have plenty to show you. This module was designed to serve a variety of periods from say 1600 onwards. At the moment this covers my Grand Alliance and Napoleonic collections. I wanted this first effort to be a bit of a statement visually on the table, hence its size - approximately 15" by 15". This is larger than I normally prefer, especially as my own table is only 10 feet x 6 feet.

The model itself is a bit of a departure for me in a couple of respects. Firstly the main building material is 2mm cardstock, rather than 3mm MDF. The latter is an absolute swine to cut with a Stanley knife, especially the windows and I have found that if adequately braced, the card is very robust. Secondly, I have painted the walls with my latest toy - a very nice airbrush. This allows me to build up a more subtle finish through the application of several thin layers, rather than the dry brushing that I relied on in the past. Things have also been speeded up considerably by using Warbases tiling sheets for the roofs. I have to confess to being initially rather underwhelmed by these when I first saw them. Having used them on this model, I am now converted. Martin at Warbases is guaranteed a place in wargaming heaven for sparing me the torture of applying hundreds of individual card tiles! For those of you that haven't used them before, they come in A4 sheets, but as individual strips. You simply overlay them, starting at the bottom and working up, until the roof is done. It still requires some time and patience, but I reckon it is three or four times quicker (and therefore cheaper) than using individual tiles. Anyway, enough of the waffle - hopefully the pictures will speak for themselves. 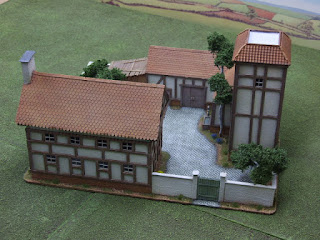 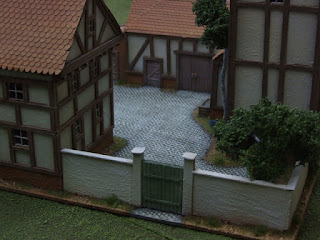 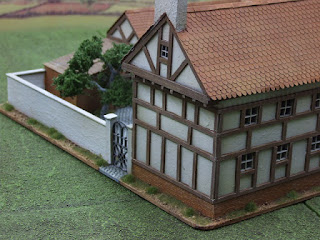 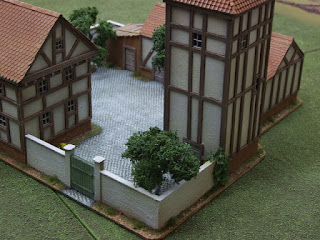 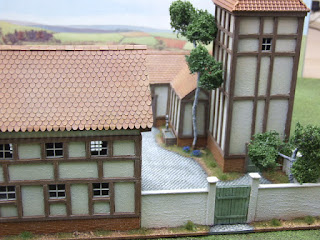 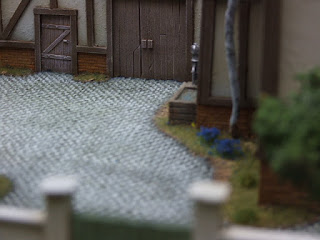 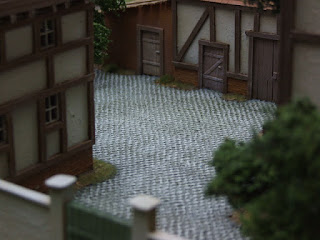 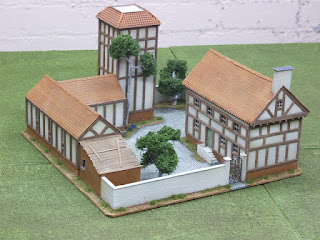 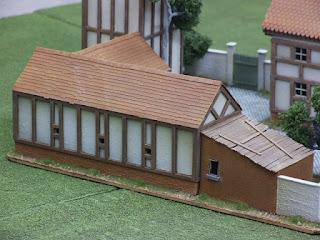 
Eleven months, even by my standards is appalling - what can I say? Remarkably enough I have picked up another follower in the meantime, so welcome and hopefully I can offer up some interesting and useful posts over the following months and years. It isn't that I haven't been busy; painting and modelling commissions are taking up much of my time and my own collections have been steadily growing. I just seemed to lose my focus where the blog is concerned - mea culpa. Anyway, there we are. My next post will feature a rather nice 28mm village module I made for myself, primarily for my Grand Alliance and Napoleonic collections. Hopefully you will like it and keep following the blog.
All the best.
Steve