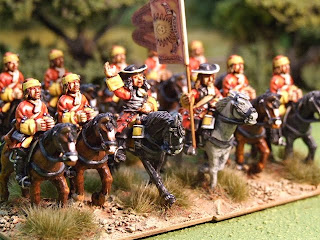 The third and final regiment in my French Dragoon brigade, Regiment Wartigny seems to have served in Flanders before transfering to the Spanish front and later to Italy. Mainly dressed in red like the Regiment La Reine, the yellow facings and trim on the stocking caps offer a nice contrast. As the release of Lily Banners 2 grows ever closer, I have increased the painting tempo considerably, with several new regiments aiming to take the field in the near future.

I have also been busy with other periods, which I hope to include on the blog shortly. These will include The Italians Wars, Arthurian, Late Roman and Napoleonic. I have also got caught up in a plan amongst a couple of mates to start a Carlist Wars collection. Variety is, after all, the spice of life.!! Oh yes, and I also need to dust off and add to my 20mm WW2 collection and sort out my terrain boards and other drop on pieces. 2011 is going to be a very busy year I think.

The main effort however has been directed towards my forthcoming venture into scratchbuilt terrain, particularly buildings. Hopefully there should be a few pictures of completed items before too long. I will be concentrating initially on buildings suitable for 20mm World War 2 and 28mm "horse and musket".
Posted by steve at 13:40 No comments: