Since the last post I have been working hard on the small mountain of figures for the game. Partly due to a very generous discount from Andy Grubb of Grubby Tanks, I have gone for Britannia  for most of the figures and vehicles, with a few odds and ends from other manufacturers where needed. I am hoping to have the terrain boards finished in a week or so and will post more pics when I do. I also need to make a load of buildings to go on them and these will also feature on the blog before the big day. This post is just to give a quick rundown of the scenario and orders of battle.

The game features essentially a massed frontal assault on the village of Seelow itself and the German defences either side of this key town. Soviet tactics will need to be fairly direct to achieve the objective within the wargaming day (always shorter at a show like Partizan with all its distractions!!). The Soviet forces are as follows:

Two Rifle regiments, each of 3 battalions. Each battalion has a small HQ group and 3 assault infantry companies of 10 figures each (I am using a figure scale of 1:10, rather than the usual 1:15). For the purposes of this game, the heavy weapons  are deemed to be in the follow up waves.

The infantry are supported by a regiment (4 vehicles each) of IS2s, ISU152s and SU76s. These will provide the direct fire support to get the infantry onto the heights as the artillery is in the process of displacing forward following the initial bombardment. There will also be a battalion of 7 T34/85s following on. The flat ground in front of the heights is very waterlogged and difficult for vehicles: if they leave the roads, they could bog down! The heights themselves are also impassable to vehicles other than on the roads. This will not be an easy job for the Soviets, who can expect heavy losses.

The Germans on the other hand are a very mixed lot indeed. Occupying Seelow and the trenches around it is a battalion of Volksturm (around 30 figures) and 2 Wehrmacht march companies (6 figures each), supported by a couple of Luftwaffe flak  batteries borrowed from Berlin's air defences. The rest of the line is held by elements of the 20th Panzer Grenadier Division comprising around 30 infantry, a couple of MMGs and mortars and a PAK40. In front of their position, occupying a village (still to be built) is a small SS tank hunting unit, with a mixture of Hetzers and heavily armed infantry. There is also a chance that some German armour may appear in the valley at some point.

Work on all of the above is ongoing and I will post some pics as soon as I can.
Posted by steve at 10:41 No comments: 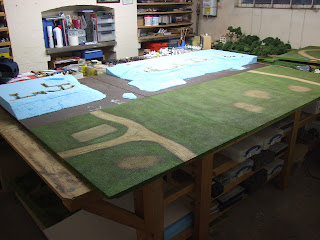 Here is another pic which gives an idea of the basic terrain layout. There will be 6 boards in total, each 30" square. The 3 under construction at the moment contain the high ground defended by the Germans and consist of a network of trenches and dugouts holding both infantry and heavy weapons. The heights are split by a small valley (centre left) and the outskirts of the town itself will be on the main part of the heights to the right. There will be a couple of small villages in front of the heights and probably a single module hamlet on the high ground to the left. each holding small detachments of Germans. The low ground in reality was very waterlogged and extremely difficult going for vehicles moving off road - this will be reflected in the game by patches of marshy ground and small copses and movement/bogging penalties in the rules. I will be using Rapid Fire! with a few additions and amendments.

The orders of battle are still a work in progress. The figure scale will be 1:10, rather than the usual 1:15, with Soviet companies of 10 figures and German at 6-8 figures. There will be probably 2 Soviet rifle regiments in the main attack, supported by units of tanks and assault guns. Fire support will be limited to direct fire weapons as most of the Soviet artillery was in the process of moving forward following the initial bombardment of the German front lines, now abandoned.

Hopefully the Blogger gremlins are now sorted out and I will be able to post regularly, as I progress with the project..
Posted by steve at 11:36 No comments:


Unfortunately I seem to be having problems uploading photos to the blog for some reason. I managed this one, but can't seem to get any further - the wonders of modern technology!! This image shows 2 of the 3 special terrain boards I am making for my Seelow Heights demo game for Partizan II this September. The game will be fairly small - 7' 6" by 5' board, featuring a mixed bag of panzer grenadiers, Volksturm and others  attempting to hold the Soviet hordes at bay. I have still to complete the Seelow Heights part of the terrain as you can see, as well as making a load of buildings and painting all the vehicles and most of the figures. It will be tight, but I should make it. Hopefully I can resolve my technical issues and post a load more pictures as I progress. 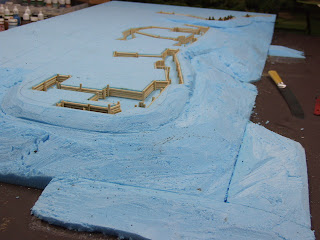 If you are at the show on September 1, by all means pop over and say hello.