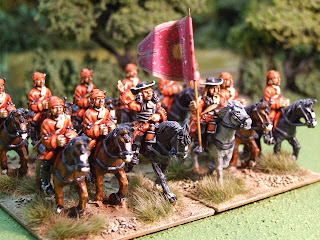 Counterparts to the Dutch dragoons that have already featured, this unit is the first of a brigade of three regiments, each two squadrons strong. Although inferior to the more numerous
"horse" in melee, dragoons can be used in a dismounted role, giving them a useful flexibility. One thing I must admit to being unsure of is how flexible they were in this mounted/dismounted role. It doesn't appear that they fought like, for example cavalry in the ACW, using both mounted and dismounted action in quick succession; a large number of French dragoons held the French right at Blenheim, but seem to have remained dismounted throughout the battle and were indeed behind barricades. This may have been due to a lack of horses. At Ramillies, a large force of dragoons that were initially mounted alongside the main body of horse, were subsequently dismounted to assist in an ill-advised counter-attack against the Dutch Guards. they were comprehensively shot up by these Guards and then overrun by Danish horse. This put them out of the battle permanently. This particular regiment had red coats with red facings and caps. The saddle cloths were also red, edged white. Most of their service was in Flanders.
Posted by steve at 02:50 No comments: 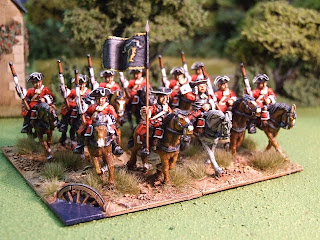 This is one of my favourite units and is usually brigaded with the Garde Dragonder. The red uniforms are very distinctive - the Dutch army of this period having a tendency to white or grey. I have used the Foundry tricorned dragoon pack with the officer and standard bearer from the "informal tricorn" command and a hand painted flag. Whilst the regiments in BLB are not large, I am not averse to cutting down on painting time where I can and have included only 11 figures in the unit. As you can see the place of the 12th in the front left of the picture, is taken by a pool of water and a broken cannon wheel. Even such small attempts to "diorama-ise" a base can look quite effective. 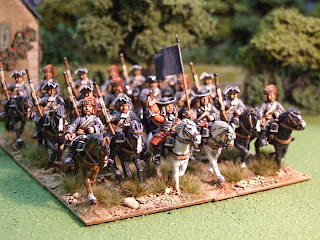 The Dutch Guard Dragoons, also known as Eppinger's, was an elite mounted regiment with a distinguished service record. At the Battle of the Boyne it was the strongest cavalry unit on either side, numbering over 6oo men and was prominent in the outflanking move against the Jacobite left. The regiment also distingished itself in the fighting in mainland Europe. At Steenkirk, the men dismounted and helped to cover the retreat of the army with their muskets. The inspiration for painting the regiment came from Barry Hilton (of League of Augsburg fame). I really liked his use of figures in both fur hat and tricorne; slung muskets and held on the hip. The unit, as befits its size in real life, is composed of 3 rather than the usual 2 squadrons. It is rated as Guard in BLB. The figures are all Wargames Foundry with a hand painted flag.
Posted by steve at 13:25 1 comment: 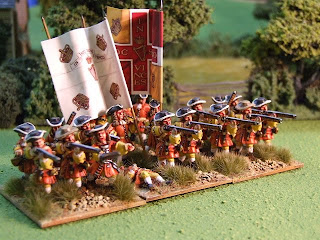 The second of my Irish regiments, Clare's service was initially in Italy for most of the War of the Grand Alliance, before transferring to the northern theatre. Here it fought at Blenheim, Ramillies and Malplaquet. In my French army it forms a small brigade with Dillon's regiment. Figures are mainly from Foundry with GMB flags.

With four units of infantry for each side now shown, I will upload some shots of the cavalry next.
Posted by steve at 14:14 2 comments: Part of the Irish Brigade, this regiment was employed mainly in Spain and later in Italy before seeing service on the Rhine towards the end of the War of Spanish Succession. A "must" in any French army with its distinctive red coats, the brigade stands out well amongst the mainly grey/white ranks of the French infantry. In BLB they would usually be rated as elite. Again the figures are mainly Foundry with the odd Dixon thrown in. Flags by GMB.
Posted by steve at 14:05 1 comment: