Artillery did not play a major role in most battles of this period. Both technically and numerically, it did not have the effect that it would a hundred years later during the Napoleonic wars for example.  Nor were guns organised into formal batteries, rather they were parcelled out as required on the day. Large groupings of guns were also fairly rare and so I have simply organised them as single models, each representing perhaps 4-6 actual pieces.

So far I have painted 3 English, 1 Dutch and 3 French guns and crew; probably a little light, but enough to be going on with. 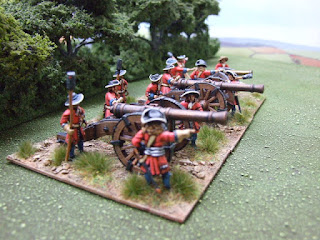 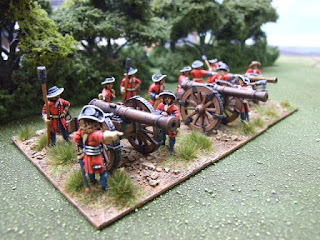 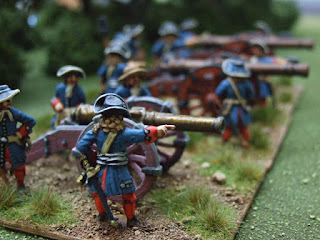 The effects of artillery in the rules is fairly modest, more of an irritant that a battle winner. Having said that, they can be quite nasty at close range and troops under fire for long periods can be significantly weakened before the main attack goes in. Eventually, I will probably look to have a gun for every 5 or 6 units of infantry/cavalry in the army.

Next up will be some command bases, which do play an important role in the rules.


The Dutch Horse Guards (Gardes te Paard) were, like their infantry counterparts,  an elite unit that fought with distinction in the War of the Grand Alliance and the War of Spanish Succession. The figures were a special cast by Barry Hilton of Warfare Miniatures and feature the drop sleeve coats peculiar to the Dutch Guards. In fact, every figure is a trumpeter from 6 different pack codes in the Warfare Miniatures range, with different sword arms, rather than the usual trumpet - a very unusual unit. My own regiment, with an earlier basing method, illustrates the unit on Barry's web site. 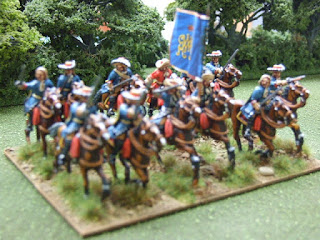 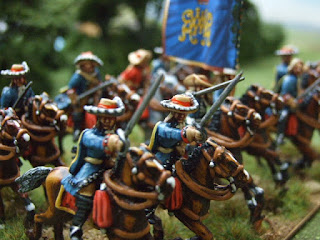 Initially, all my cavalry regiments were going to be a standard 12 figures in 4 bases of 3. I had intended using the Piquet Field of Battle rules, as I do for Napoleonic, but decided that, much as I like the rules, I didn't want all my games to be played using the same set. Variety is the spice of life and all that! I decided to revert to a set that I first came across at Sheffield Triples, 3 or 4 years back, as used by the Grimsby lads in their superb Marlburian demo game. Unlike Field of Battle, these rules are decidedly "Old School", with individual figure casualties, rather than the more abstract unit strength points. I felt that 12 figure units would be a bit flimsy and so decided to undertake the considerable task of upgrading them all to better suit the rules.

Rather than 4 bases of 3 figures each, regiments would consist of (usually) 2 squadrons, each of 8 men, based in pairs, for a total of 16 figures. Some regiments with 3 squadrons would be doubled in size to 24s. This obviously involves a fair bit of extra painting, but the visual results should make it worthwhile. Because the Dutch Guard mounted arm was fairly small, I decided to leave this regiment as a small 12 man unit. This was, I must admit, partly because the figures are only available in a 12 man regimental pack and I couldn't countenance the wastage! I did however re-base them in pairs to match everything else. The other variation is in the French Maison du Roi and the Gensdarmerie. The squadrons in these units tended to be larger at around 200 men and they will be represented by 10 man squadrons, probably in pairs, for units of 20 figures.

This upgrade with be a fairly protracted job I think, although for most units it only involves painting an extra 4 troopers. With around 16 regiments to do, it will still take a while I think. As the units are done, I will post them on the blog. Hopefully it will be worth the effort!!


Am nearly there with the new terrain boards and really looking forward to getting some of these toys on the table before Christmas!! I have managed to get another couple of battalions done in the meantime, one for each side. 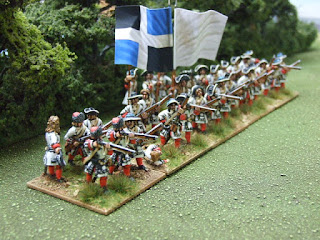 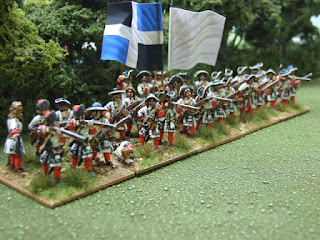 For the French the regiment Lyonnais, the usual mix of Warfare Miniatures, Dixons and GMB flags. This brings my French army up to 15 battalions in total, plenty for a good sized game. 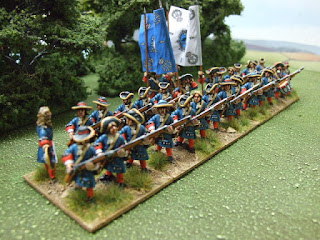 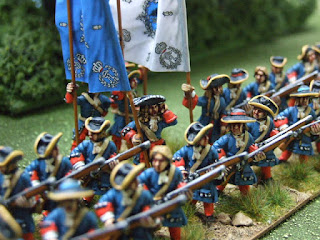 For the allies, the regiment Brandenburg-Preussen - a Prussian unit in Dutch service. The flag is actually from the GMB 7 Years War Prussian range - a very close match. This is my 13th allied infantry battalion, with the figures undercoated for a couple more, when time allows.

The next post will show some new cavalry, with notes on organisation for the rules I will be using.