This is the smallest contingent in my Grand Alliance Army with only 2 battalions completed at the moment. The Danes had a solid reputation for providing good quality mercenary troops. They were financed by either the English or Dutch governments and usually performed well. 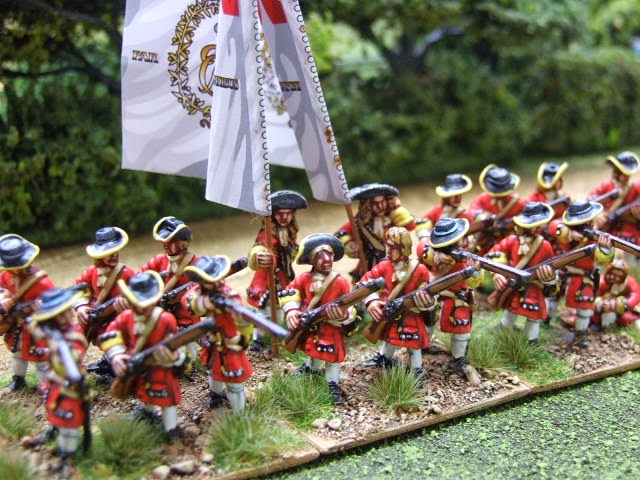 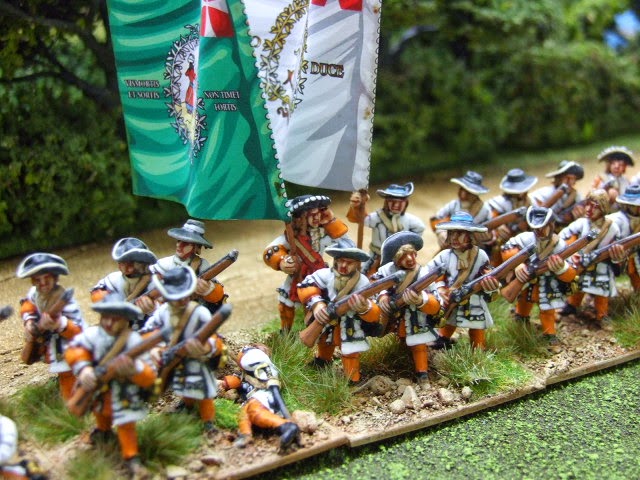 Both units are a mixture of Dixons and Warfare Miniatures. The flags are also by Warfare.


Before moving on to the Allied infantry, I thought I would post the three latest battalions that have recently joined the ranks of the French army. These are the Regiment de Navarre - one of the oldest regiments in the French army - and two battalions of the equally prestigious Gardes Francaises. 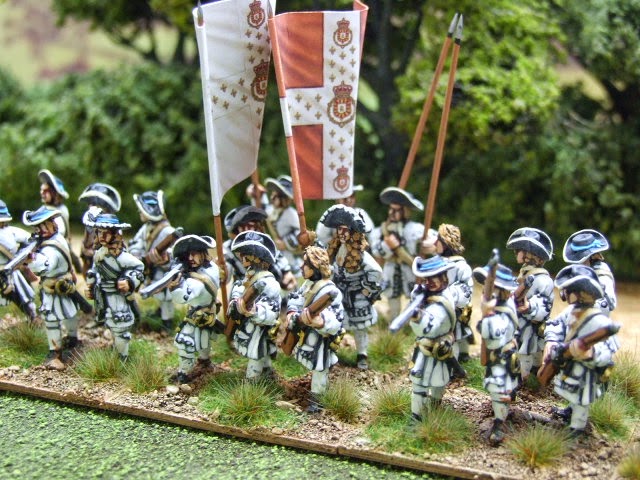 I was a bit concerned that this unit might look a little bland, as there is no distinctive facing colour to brighten up the basic uniform. I do like the flags though! The figures are, as usual a mixture of Dixons and Warfare Miniatures. The flags are from GMB. 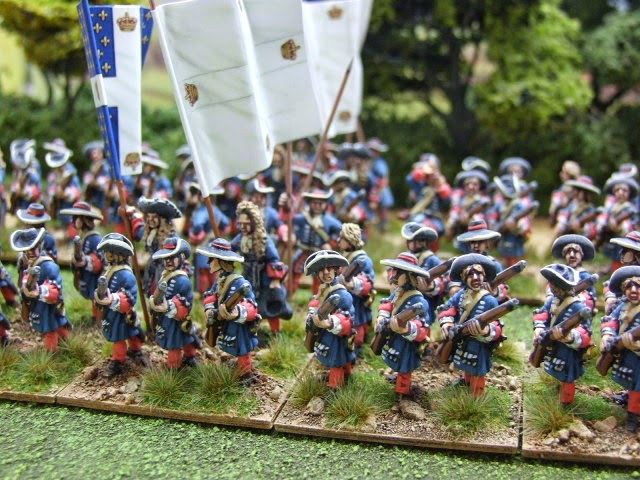 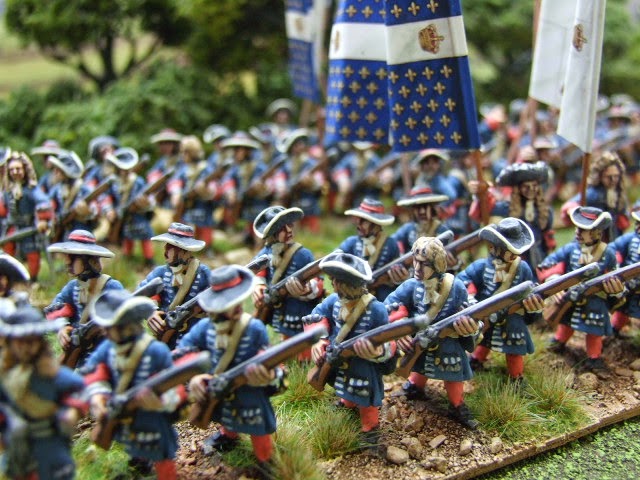 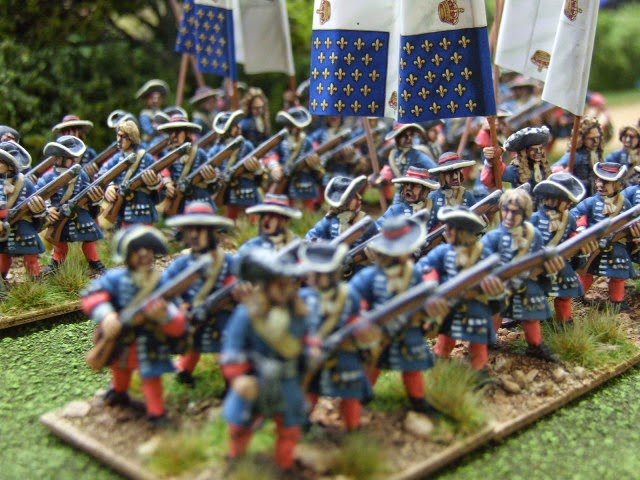 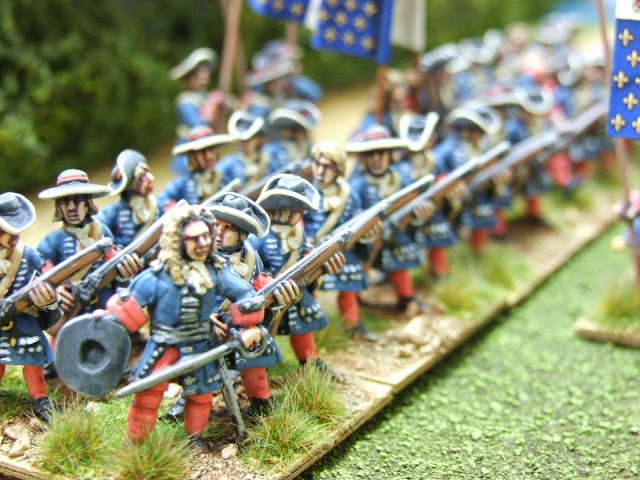 I was particularly pleased with the way these two units turned out. I used the standard Dixon infantryman, without the Warfare Miniatures firing line figures to give a uniform advancing/at the ready feel to the units. Officers, standard bearers, drummers and pikemen are from Warfare.

This brings the total up to 14 French battalions - enough for a decent size game. Next up will be their Grand Alliance opposite numbers: the Danes, Dutch and English.


Over the last year or so, I have managed to make a good deal of progress with this particular collection. Having started out using Beneath the Lily Banners by Barry Hilton of League of Augsburg fame, I have moved over to Piquet Field of Battle for much of my horse and musket gaming. I hope to do a more in-depth review of these rules in a future post, but suffice it to say that having tried FOB, I am completely hooked. The rules themselves are pitched at the period 1700-1900, but can easily accommodate the Grand Alliance period, with the addition of a couple of additions to cover the use of pikes. The unit sizes tend to be fairly generic and so players can, within reason, suit themselves. Having grown up with Peter Gilder's In the Grand Manner Napoleonic rules, I have always liked fairly chunky units and so decided to increase the basic infantry unit from 18 figures to 30. Whilst you can obviously get fewer units on the table, the visual effect of the larger battalions is fantastic. Based in 5 lots of 6, the command stand, each with 2 flags, is front and centre - where it should be and the units look both impressive and balanced. Each battalion has a 3 figure half-stand of pikemen. These are used to show that the unit is pike equipped. In the 1690s most were, but by the time of the War of Spanish Succession only a few year later, these had largely disappeared. By omitting the pike stand, the unit can then be used for the Marlburian period - only the informal tricorne, rather than the more formal version differentiating the two periods. From what I have read, this is, in any case over-stated as the Marlburian version would soon "wilt" in campaign conditions!

Cavalry units are 12 figures strong, with 4 bases of 3. This was chosen because it both looks good and fits, more or less with the frontage of an infantry battalion; the number of figures in a FOB unit is largely irrelevant as long as unit frontages are broadly similar. Artillery are deployed as single gun "sections", rather than the normal 2 gun battery. This reflects the way that artillery was used in smaller groupings, rather than the more formally organised batteries of later wars.

In this post, I will just show the French infantry units that are completed. Future posts will cover the cavalry and the various allied contingents of the Grand Alliance. 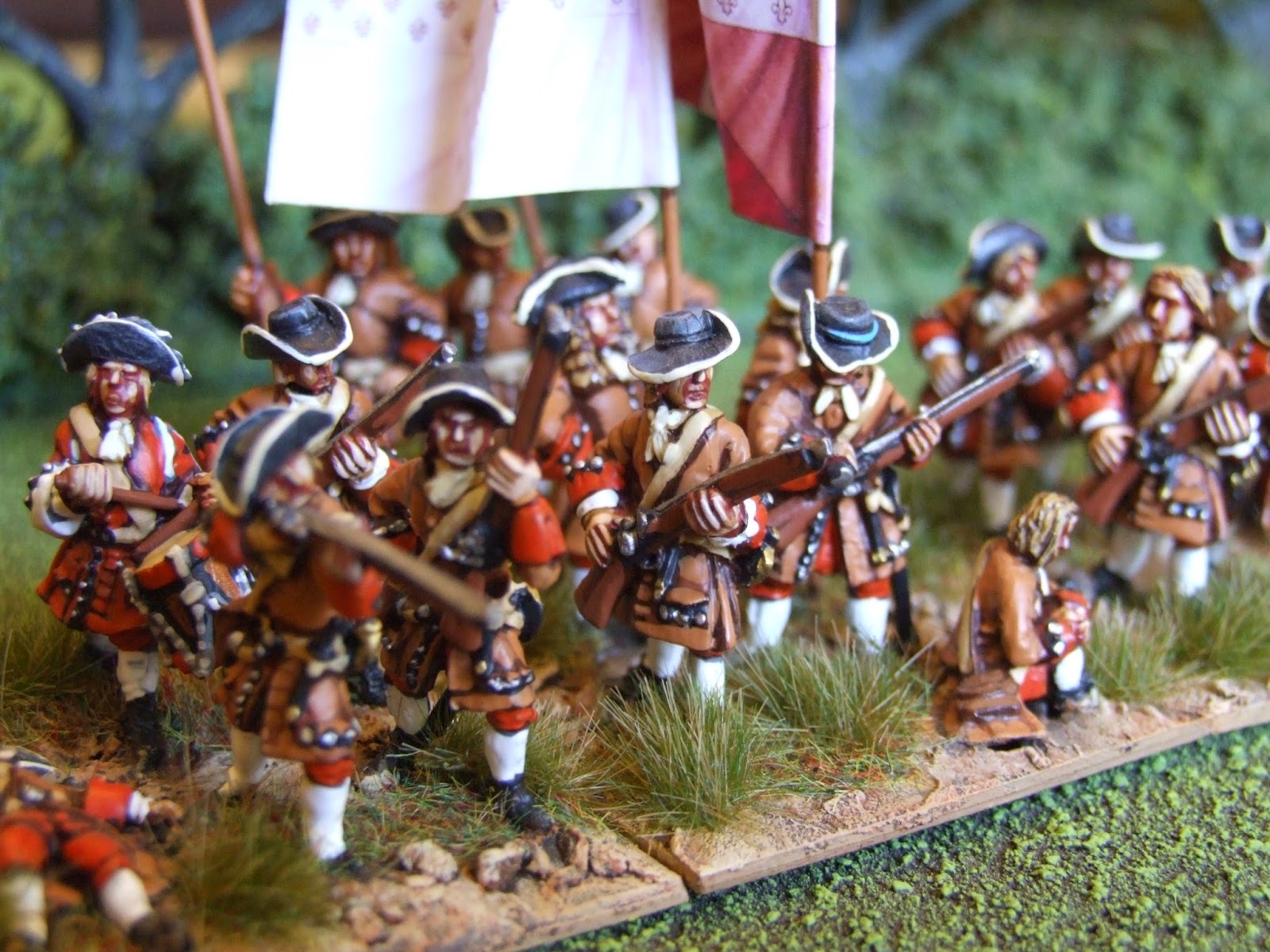 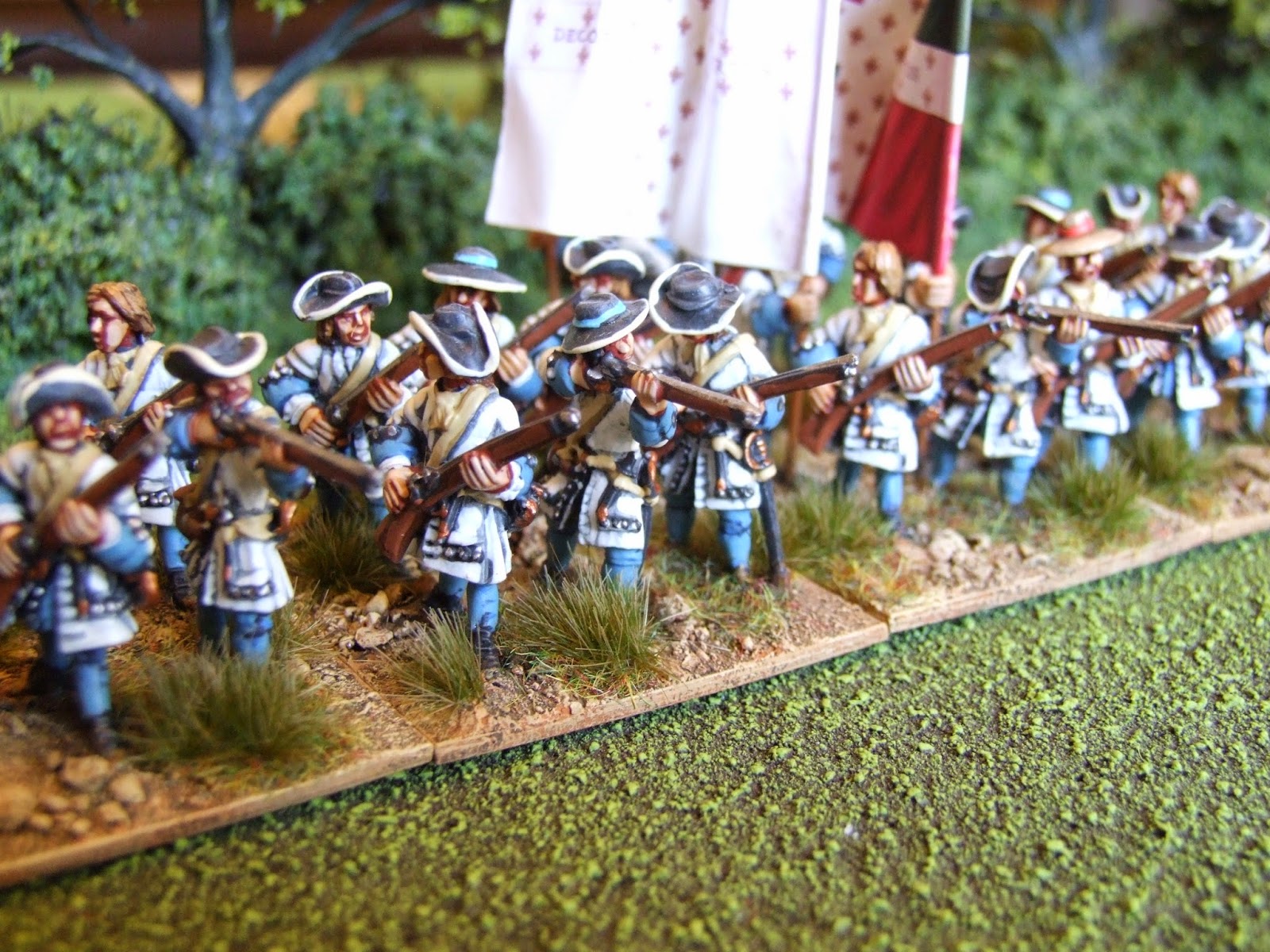 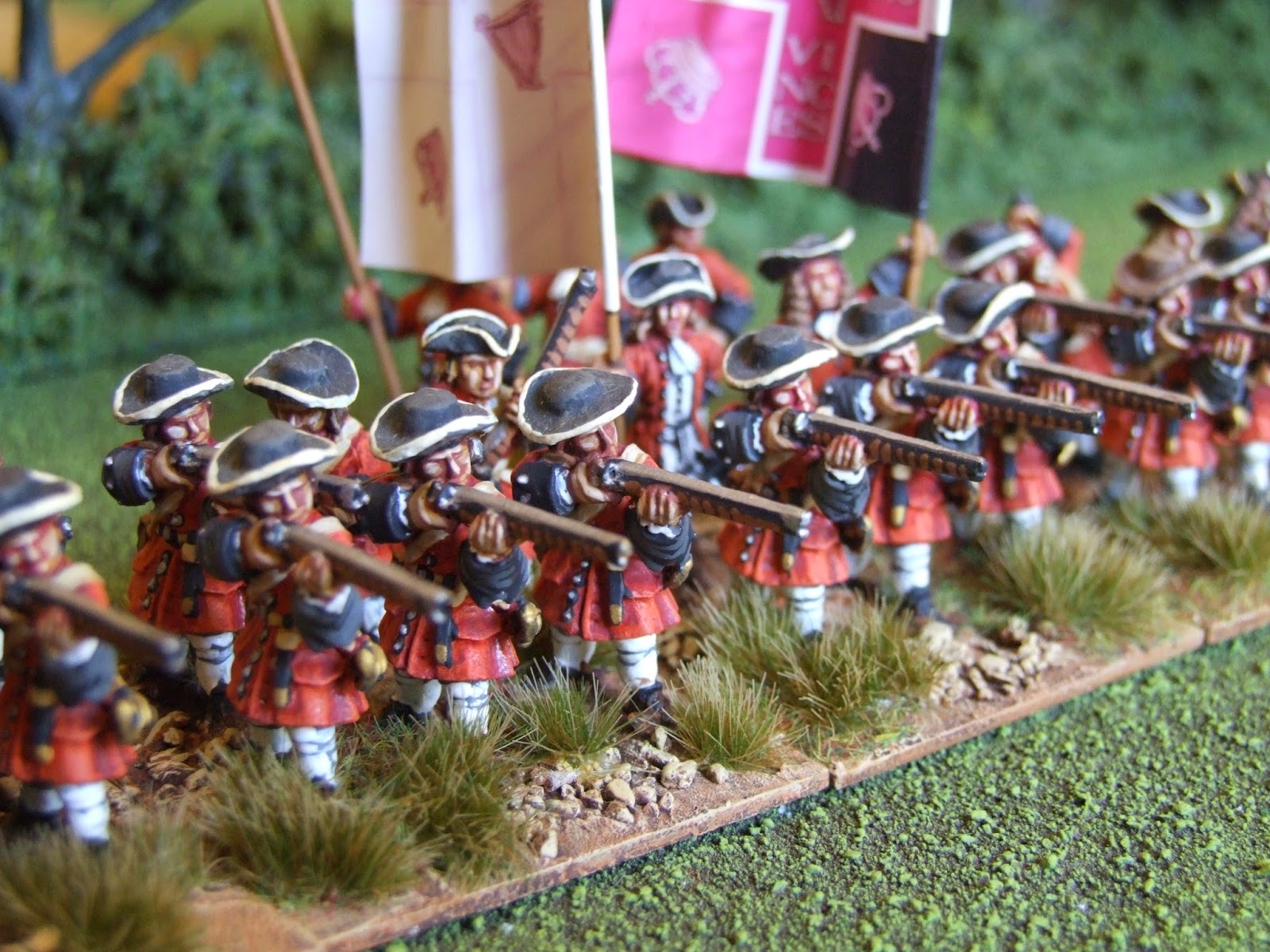 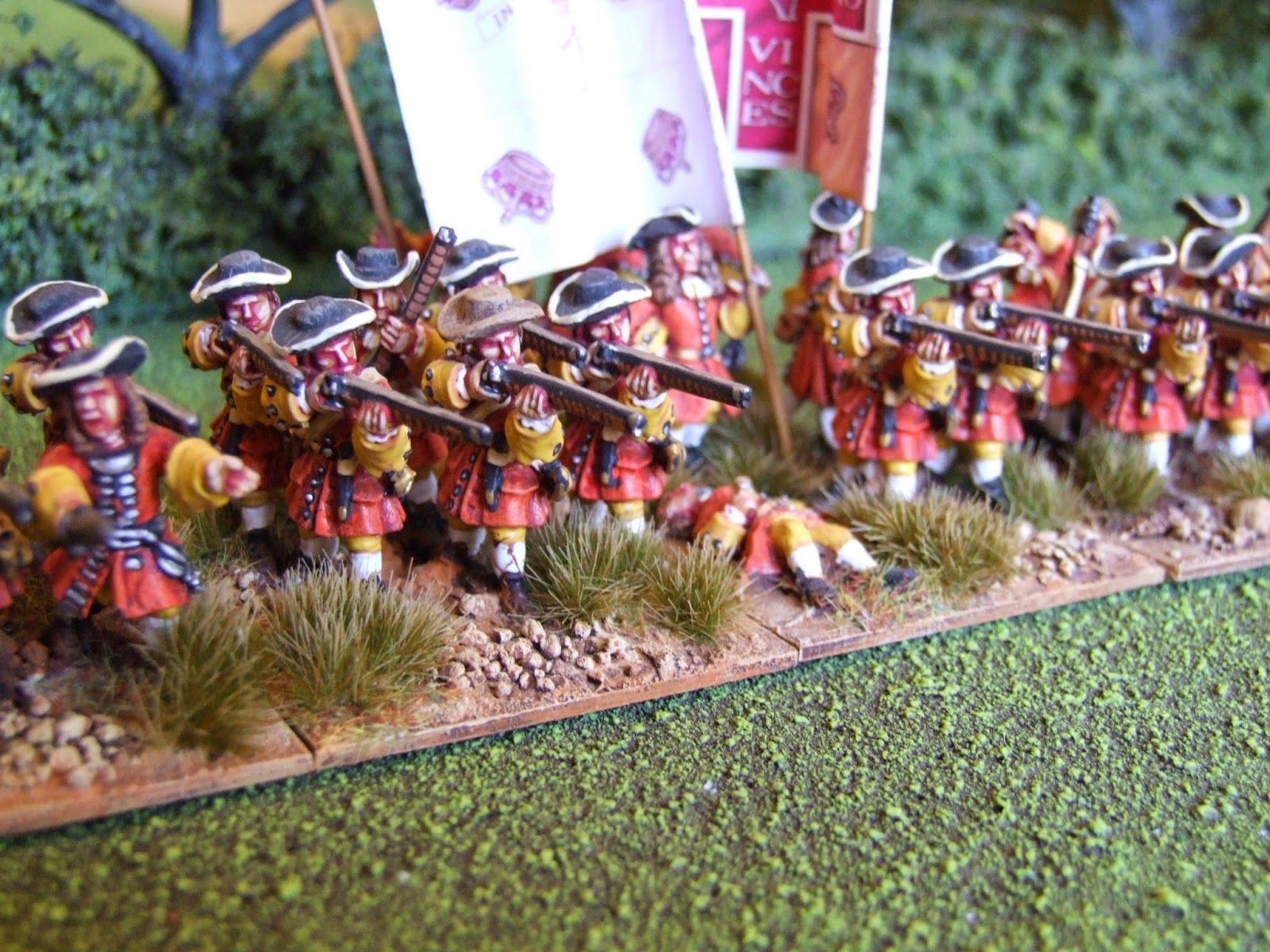 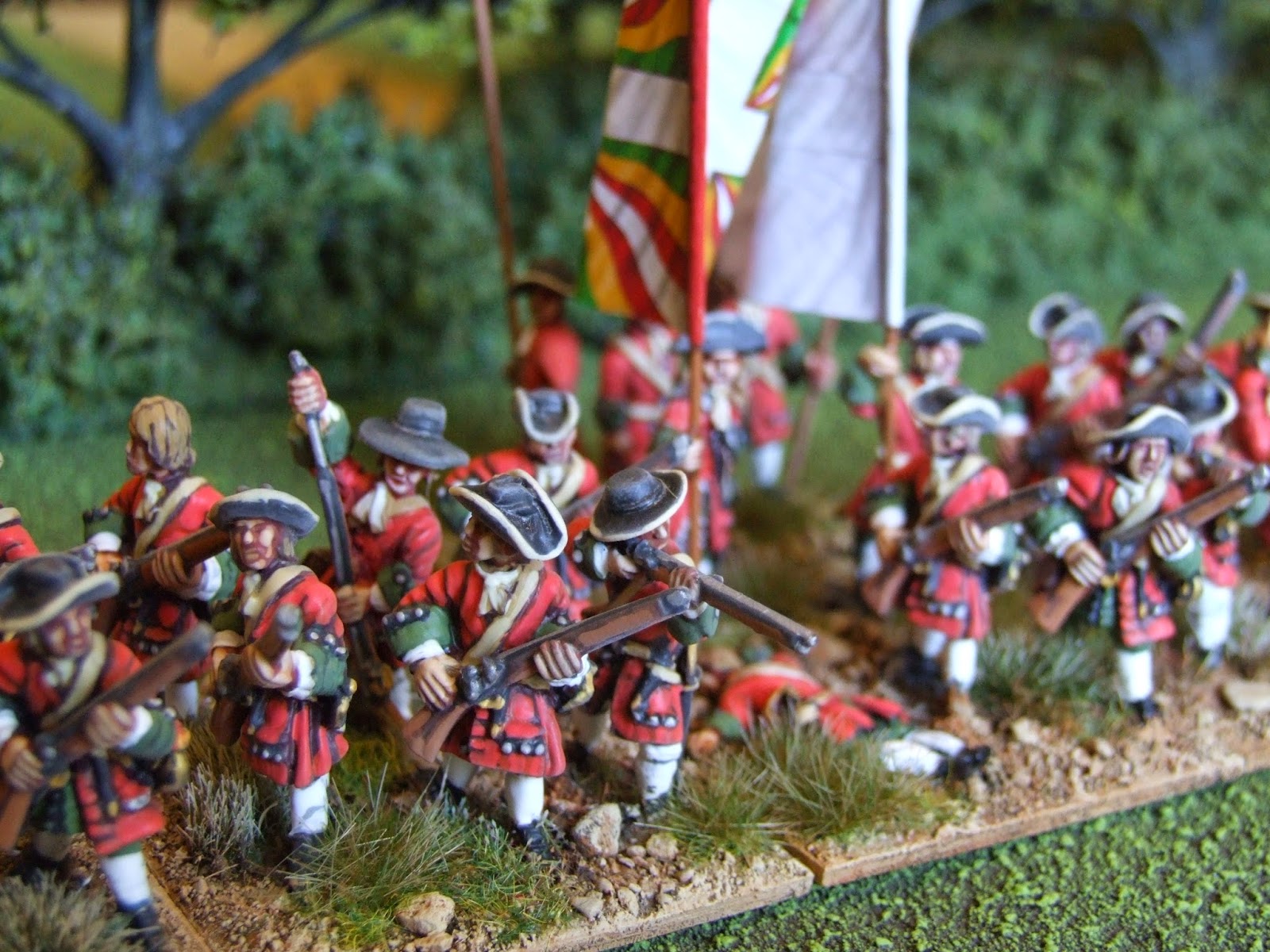 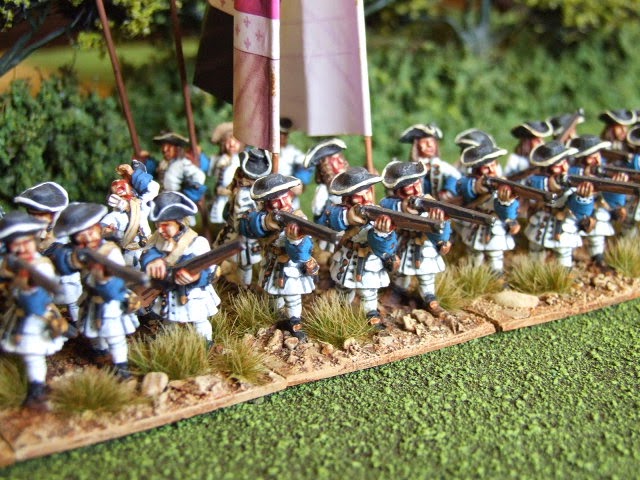 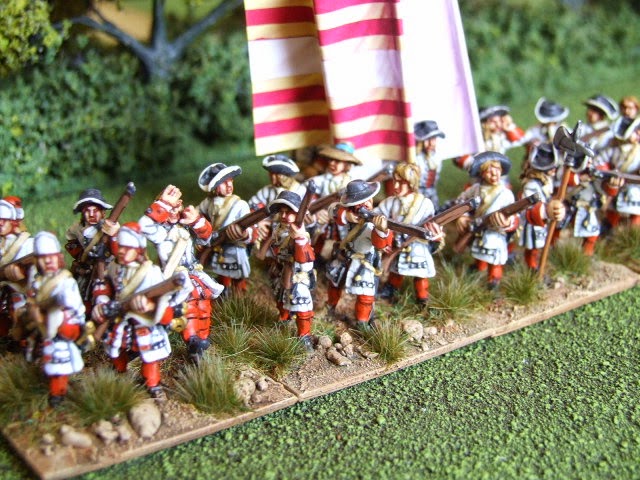 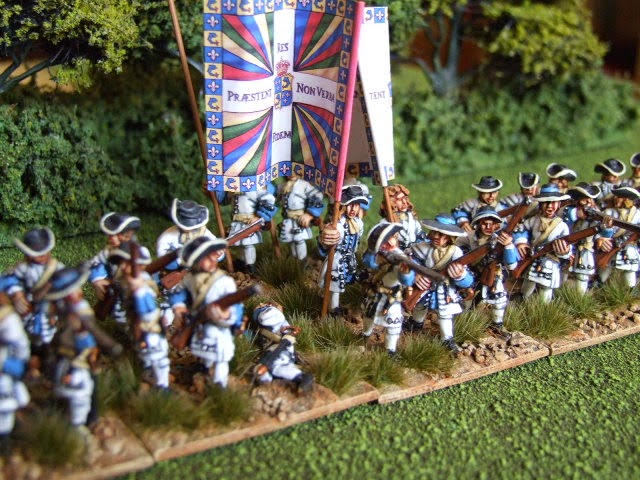 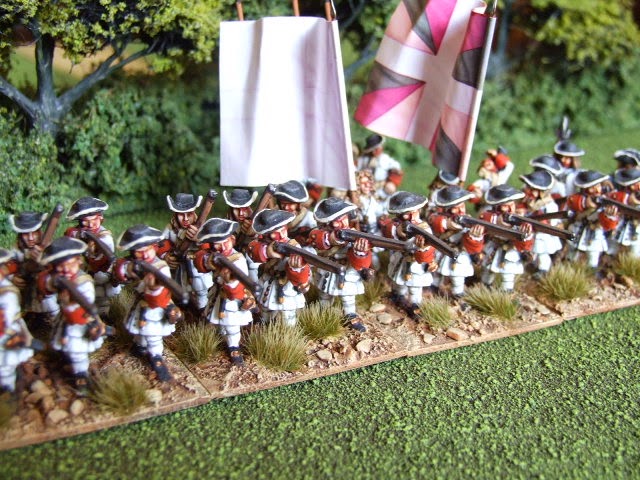 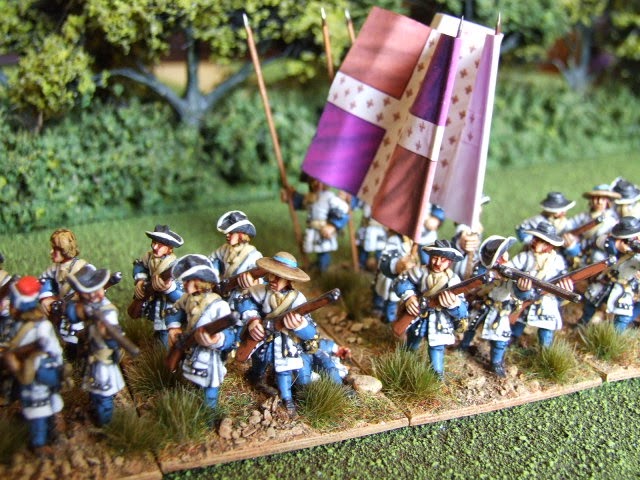 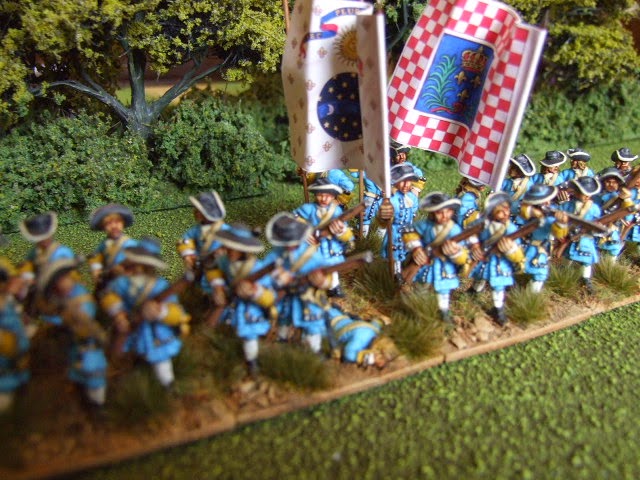 Most of the battalions use the old but still very nice Dixon infantryman, with head variants as the stock figure. Most battalions also include a number of the delightful Warfare Miniatures figures(another venture by the multi-talented Mr Hilton), particularly loading and firing figures, command and pike. The two ranges are an excellent match. Four of the older battalions are made up of old but equally serviceable Foundry figures.

There are 3 more battalions in the final stages of completion - one line and two of the famous Gardes Francaises. These will make an appearance in a future post.

So, there we are. I hope that I can keep to my intention of posting more regularly and that you will like what you see. 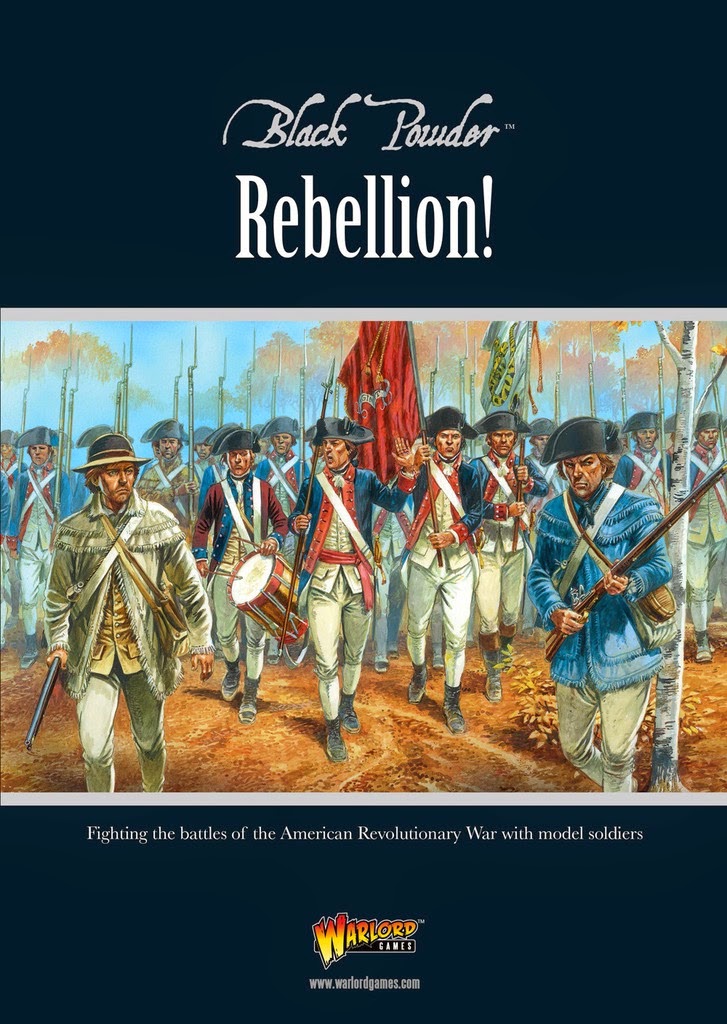 Yes, it has been a long, long time!! No excuses. Although I haven't updated my blog for ages, I have been far from idle. It is very pleasing to see that despite my absence from the blogosphere, many of you have kept returning to read my previous posts, which only makes me feel even more guilty!!

I have been pretty busy painting and modelling for customers, but I have also managed to grow my own collections quite a bit over the intervening months. I have also been slowly building up my terrain, replacing much of my older stuff. Over the next few weeks and months, I will post details of what I have been up to. In this post however, I would like to take a quick look at the latest supplement for Black Powder: Rebellion!, which covers the AWI.

The book weighs in at a hefty 148 pages and is profusely illustrated throughout with glorious wargames porn. Following a brief but informative background to the war - very useful for someone like me who is interested in the period, but doesn't know much - there is comprehensive coverage of the various armies. Uniforms, organisation, weapons and tactics are all dealt with in a detailed but non rivet-counting way. The real meat of the book and taking well over half of it are the scenarios - 19 in total. These cover everything from small skirmishes such as Gloucester Point to huge (by the standard of the war) battles like Germantown. Each scenario is accompanied by a map, full orders of battle and all the information needed to play the game. A very useful feature are the extra rules and interpretations of the Black Powder "toolkit" to give extra period flavour.

As someone who is slowly building up an AWI collection, this book is a valuable addition to my library and I would heartily recommend it. The author; Stephen Jones also has his own, very enjoyable, blog: Steve's Paintingshed - well worth a look.

Future posts will look at my re-vamped Grand Alliance armies, which have grown considerably over the last few months, as well as my many other ongoing projects. Hopefully I will be posting again soon!!