At last a few figures for the Crown Forces - a company of the famous and redoubtable, Hessian Jagers. These are treated as regular skirmishers and would be rated very highly in most rules. They are armed with the slower firing, but effective rifle, with which they were very proficient. The figures are from the extensive Perry range. They are unfortunately a little outnumbered at the moment by their American adversaries, but am fighting shy of starting on my first British infantry regiment - the 71st Highlanders - all 48 of them!! 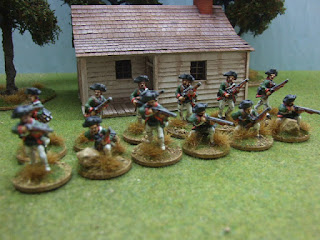 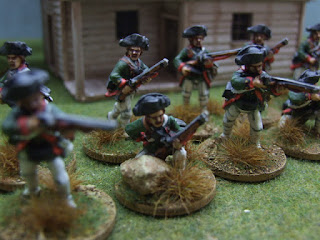 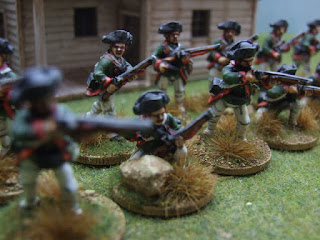 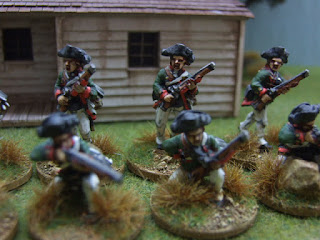 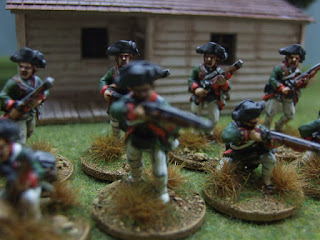 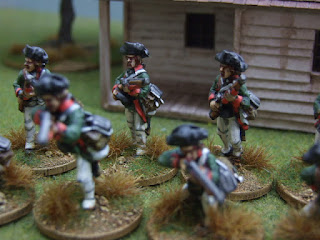 ﻿
﻿These chaps represent a "company" of militia skirmishers that will do for either side (always handy). The figures are Fife and Drum from Crann Tara Miniatures and very nice they are too. They are noticeably slimmer than Perry/Foundry figures and probably wouldn't mix that well in the same units, but they offer a nice range of poses and paint up well. In Sharp Practice, these are the lowest type of skirmishers, only receiving the very handy skirmish bonus if firing from effective or long range and from cover - they feel uneasy being too close to the enemy apparently! Other irregular skirmishers also need to fire from effective/long range but need not be skulking in cover, whilst regular skirmishers get the bonus under any circumstances, being well trained and led. A nice, but simple mechanism, as one would expect from TFL. Really looking forward to trying these rules out, but still a fair bit of painting and terrain to do first. Hopefully by Christmas.
﻿ 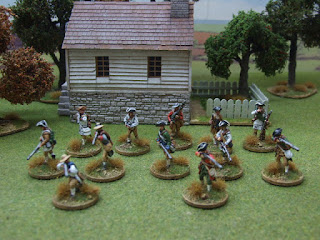 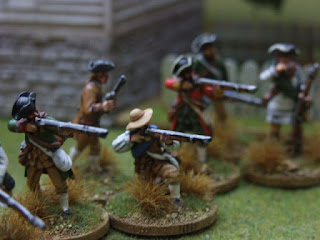 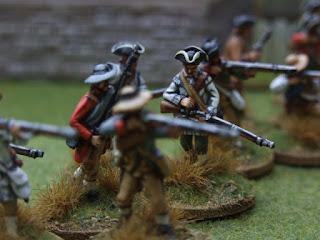 More to come over the next few weeks. Keep checking back. All comments/suggestions welcome.


This is my first American Continental regiment; three groups or "companies" of 12 figures each. When I get around to modifying Sharp Practice for larger games, I am going to have most units in multiples of 12 figures; typically infantry battalions will be between 2 and 5 groups (24-60 figures). Each company represents about 80 men, so this particular unit has a combat strength of around 240 - a reasonably strong unit by the standard of the times.

The unit is made up entirely of Perry Miniatures metal figures and is clothed in a fairly standard manner, with the addition of a few hunting shirt and militia figures in less formal dress just to break it up a bit. I think American units for this period look better with a definite "theme" - blue faced red, grey faced yellow or whatever, with some variation in small clothes, headgear and so on, with the odd figure standing out a bit more, like the guy in shirtsleeves and waistcoat. I have just bought a box of American Perry plastics and am going to play around with those and see if they add to the occasion or not. The flag is a Mark Allen hand painted confection - a luxury I can't usually afford, but I just love hand painted flags! 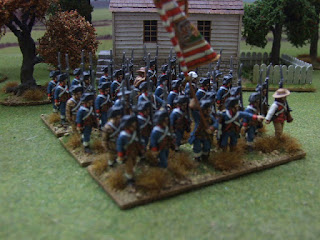 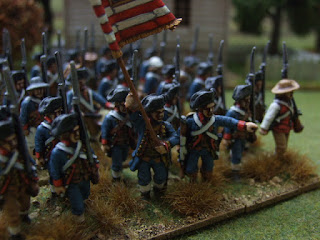 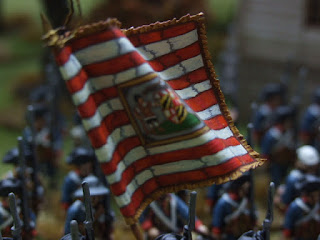 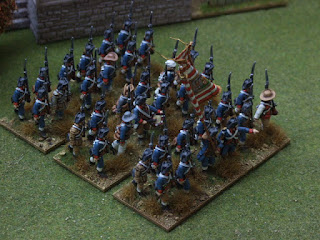 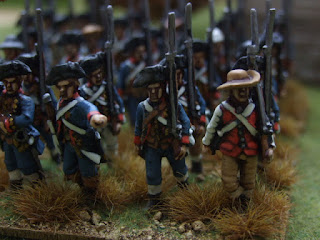 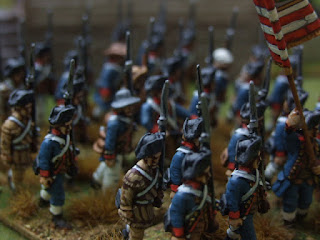 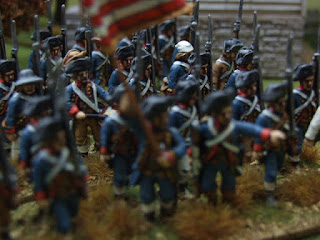 I am really into my AWI at the moment, so am going to crack on whilst I am in the mood. More fencing on the way (!!), which I won't bore you with further and a load more American militia, plus some skirmishers and artillery....and Loyalist militia and jagers and... well, you get the idea. I am hoping that I can keep up the momentum until there is enough for a game. I reckon playing unadulterated Sharp Practice, I can get a nice looking game with another 100-120 figures, so on the horizon if not imminent. Ultimately, I would like to be able to play with 250-300 figures a side; whether the rules can be made to stretch that far remains to be seen. ﻿
Posted by steve at 04:37 3 comments: