One of the attractive features of this period is the large amounts of cavalry employed. It is not unreasonable to field 25-30% of an army as horse or mounted dragoons, which gives plenty of opportunity for that sight, much beloved by wargamers: the massed cavalry charge. "Corporal John and the Sun King" encourages this, with a very clean and decisive melee system, where waves of cavalry can charge, fall back and counter charge with dramatic changes in fortune. Alternatively, if both sides throw good morale dice, the action can build up into a huge swirling melee that can last for several turns.

Having shown a few pics of my growing allied cavalry force, I thought you might like to see the French cavaliers in all their glory. So far, I have seven regiments; 4 of horse and 3 of dragoons, but over the next year or two, I will be looking to double this by adding several more units of horse and some Household troops and Gensdarmes. 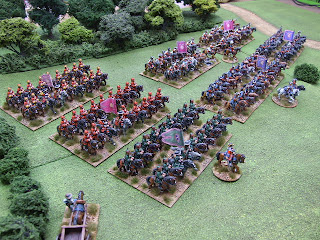 This shot, shows the whole force in motion; dragoons on the left, horse on the right. Below are a few shots of my favourite unit: the Royal Cravattes in action. Firstly a close up, followed by charges against the Dutch Foot Guards and Murray's Scots Regiment in Dutch Service. 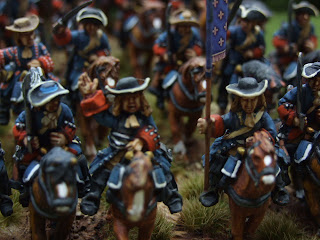 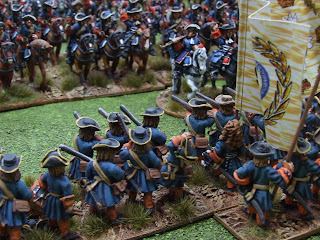 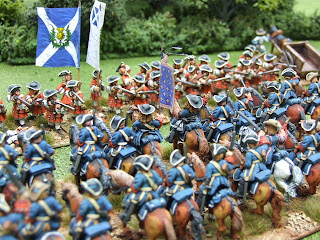 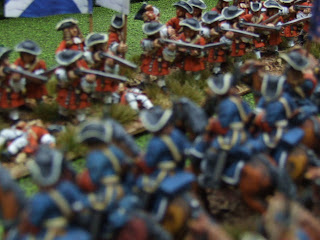 Here are some shots of the larger force on the move - in imposing sight! 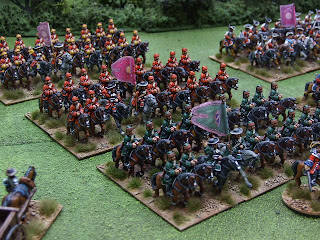 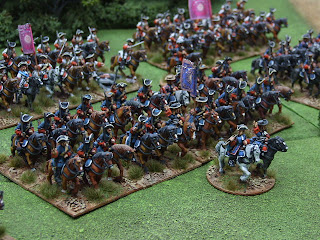 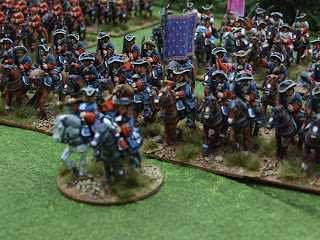 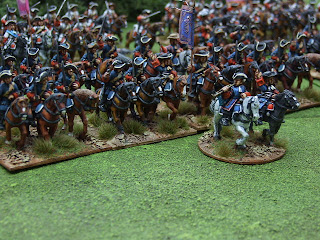 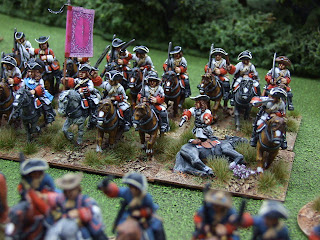 I have really got the bit between my teeth now with this period and hope to see the size of the collection grow considerably. Next on the list is more French infantry; I have recently completed a battalion of the regiment Le Roi, and have the figures for three more awaiting my attention. Alongside them are two further battalions of English infantry and another regiment of French horse. I was chatting to Barry Hilton at the Partizan show last Sunday and he has big plans for his Warfare Miniatures range, which is really taking off. I saw a unit of his newly painted (Jacobite) horse, which were quite superb, with lots more stuff in the pipeline icluding French Guards and a range of flags, which also looked very nice indeed. Now seems a great time to get into this period with so many nice figures on the market.

If you fancy a regiment or two for your own collection, let me know.