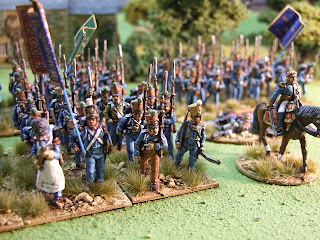 It has been longer than I would have hoped since my last post. The delay is mainly due to being very busy indeed on the buildings front. So far, I have completed a nice 25mm farm and some 20mm WWII buildings. Hopefully I can finish off a few odds and ends and get some pictures posted in the next couple of weeks. The results are quite promising.

In the meantime, I have also managed to get a few figures done: Swiss pikemen, Napoleonic Russians and, as the picture shows, the last two battalions of my French 10th Light Infantry Regiment. Hopefully 2011 will see this collection mature quite quickly.

I have also been planning my 20mm WWII project and have settled on an early action from the Ardennes campaign, involving elements of the Fuhrer Begleit Brigade and the U.S. 7th Armoured Division north of St Vith. As I mentioned in my last post, this will involve creating the whole thing from scratch, including terrain boards, drop on terrain such as buildings, woods etc, figures and vehicles. I will post details of this as the project develops.
Posted by steve at 15:58 1 comment: