A Blast from the Past

Surfing the various and wonderful wargames places that are out there, as one does, I came across this old photo on Doug Mason's blog. It was taken back in 1990 (yes really) and shows the participants in the 175th anniversary re-fight of Waterloo. Amongst many other things it was Peter Gilder's last wargame; as you might be able to make out, he was in a wheelchair and in the final stages of the disease that would ultimately and before much longer, kill him. He was, I remember, unable to move very much and could certainly not shuffle the vast numbers of figures involved around the equally enormous table. But in the closing stages of the battle as his Imperial Guard cavalry and my British lights fought a series of swirling melees, his delight in the hobby was clear to see. 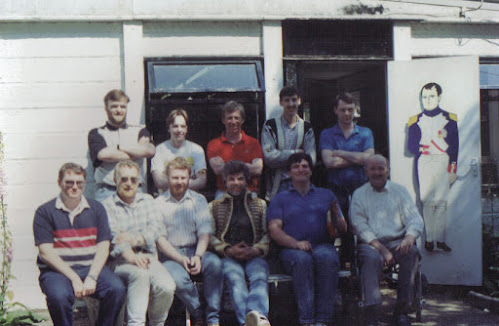 That's me, back row, right - hair has a bit more grey in it now! The theme of this photo might be: people who run wargames holiday venues - centre rear is Mike Ingham, who took over from Peter, also alas no longer with us. Between Mike and I is Richard Harris, now running Legendary Wargames in Yorkshire - a fantastic set up I have visited several times, whilst rear left is Mark Freeth, owner of the Wargames Holiday Centre in Basingstoke! Doug Mason is centre front in a rather fetching hussar getup.
I am hoping to release another scenario book in the next few months - this time on the battle of Leipzig. It is provisionally entitled "Let's Fight Leipzig"!! A reference and intended homage to Peter and everything he did for Napoleonic wargaming in particular and wargaming/painting/figure design in general. I must admit I got a bit of a surprise when I saw this photo after more than 30 years!
Posted by steve at 11:49