The Seelow Heights: A Progress Report.

Proof reading is continuing. This is perhaps the hardest bit as after a while you start to see what you expect to see, rather than what is there. Hopefully nothing of importance will slip through. About two-thirds of the photos are done and I must admit, I am pretty pleased with them. Old wargaming friend John Smith, of Leeds Wargames Club (of FIASCO fame) has done a lovely job and his professional advice has been invaluable. Here is another of his efforts which will probably not make the final book, at least not in this form. 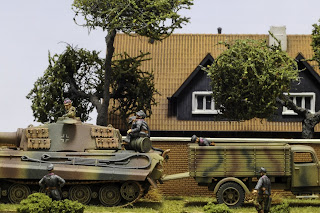 I am pretty pleased with the scenarios too. I think they should provide interesting and playable games, giving the Germans a realistic chance. One of the main premises is that whilst the Germans are clearly going to lose the war, the urgency for the Soviets comes not from the final result, but whether they can win quickly; Marshal Zhukov was terrified that his old rival, Marshal Koniev, would beat him to Berlin. As a result he imposed a punishing and highly optimistic timetable on his troops and subordinate commanders, leading to some serious reverses and horrific casualties. This, as much as the German opposition and awkward terrain give the Soviet players plenty to think about.

Still looking good for a November release so fingers crossed!